The Antiochos tumulus, the historical sculptures, and remains which are at the top of Mount Nemrut are the most important historical structure of Commagene civilization in Adıyaman. We can reach to 1000 meters below the hill where the tumulus is located by car. After that, we go 800 to 1000 meters on foot or rent a donkey which can be used as a vehicle in there. After all, we walked towards to east of the mountain. Before we tell about what we see here, it is useful to give some information about the Commagene civilization. 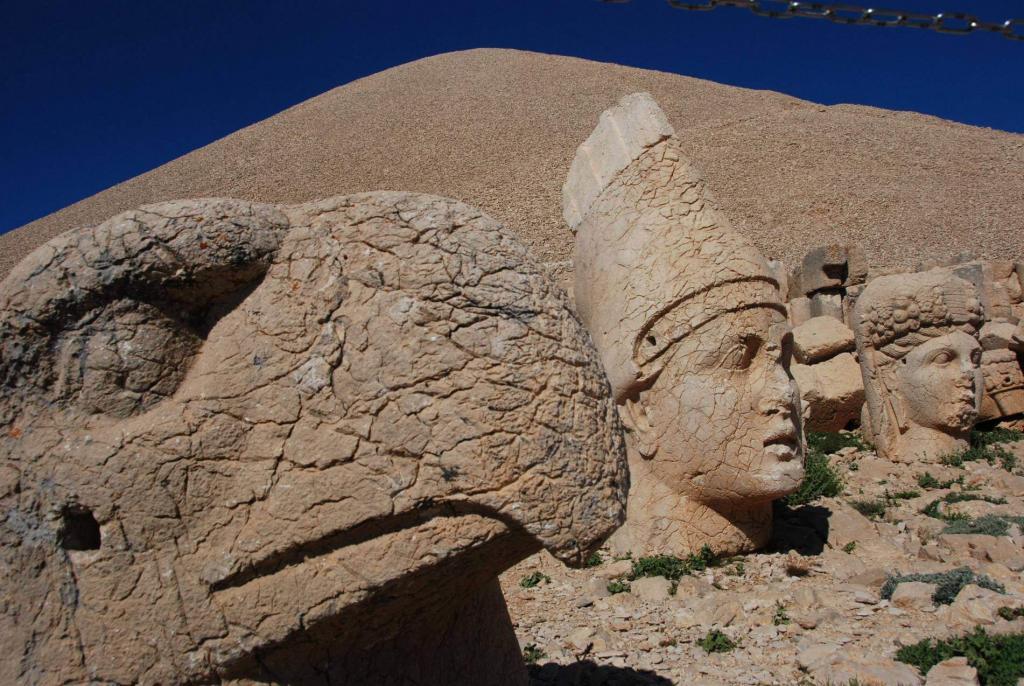 The meaning of Commagene is genes community in Greek. The Kingdom of Commagene is a powerful kingdom where the union of faith, cultural traditions of Persian and Greek civilizations. Commagene was established as an independent kingdom by Mithridates I Callinicus in the 1st century BC. During the reign of Antiochus I Epiphanes, the son of Mithridates Callinicus, the kingdom came to the forefront in 62-32 BC. After Antiochus I, Mithridates ruled the kingdom. The Kingdom of Commagene, which ruled 141 years, was captured by the Roman being a state in 72 AD.

In 1881, German engineer Karl Sester worked in road construction in Diyarbakir. After seeing the structures in this area, the Royal Academy established a research team because of the information he gave. This team, headed by Otto Punctein, came to the tumulus on the top of Mount Nemrut. He worked on the tumulus, on sculptures and reliefs in there. 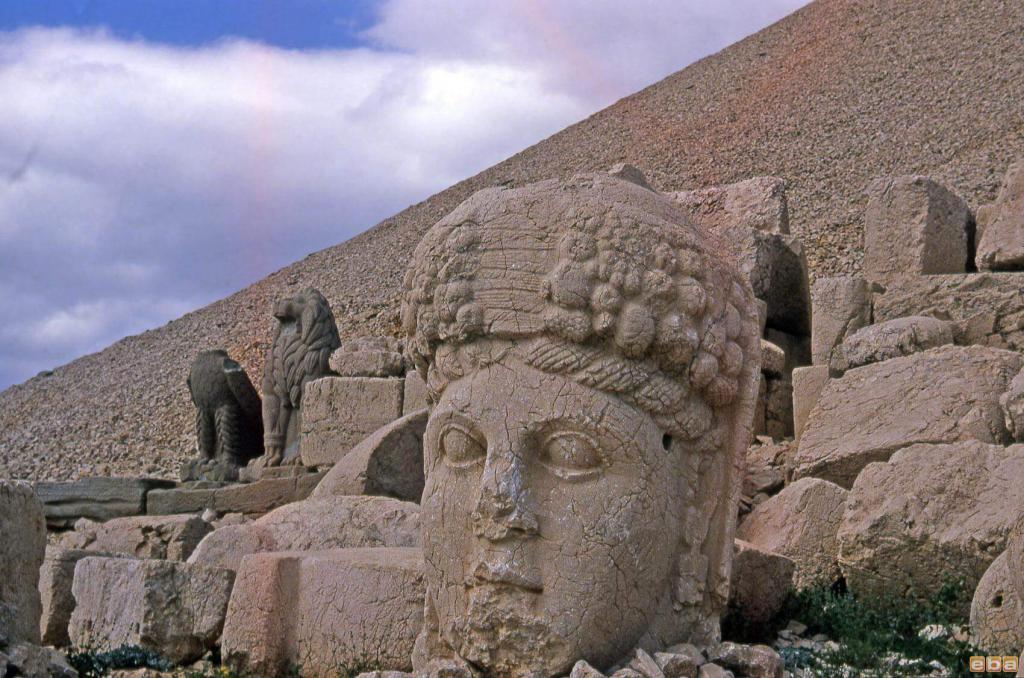 After the long research hours, Otto Punctein decrypted the Greek words on the works. He discovered that these structures belonged to the Commagene civilization and were built by Antiochos I. The inscription written based on Antiochus’ words, includes the secret of Mount Nemrut and the laws of Antiochos. In the inscription “I am King of the Commagene Antiochos I, really I am worthy of these sculptures worthy of God” is the statement.

Later, the excavation of Mount Nemrut, German engineer Karl Humann and Osman Hamdi Bey, founder of Istanbul Archeology Museum was joined. From 1953 to 1980, the American archaeologist Theresa Goel and the German archaeologist Friederich Karl Dömer continued to the excavation. These researches have been carried out since 1986 by Şencer Şahin, the student of Prof. Dr. Karl Dömer. 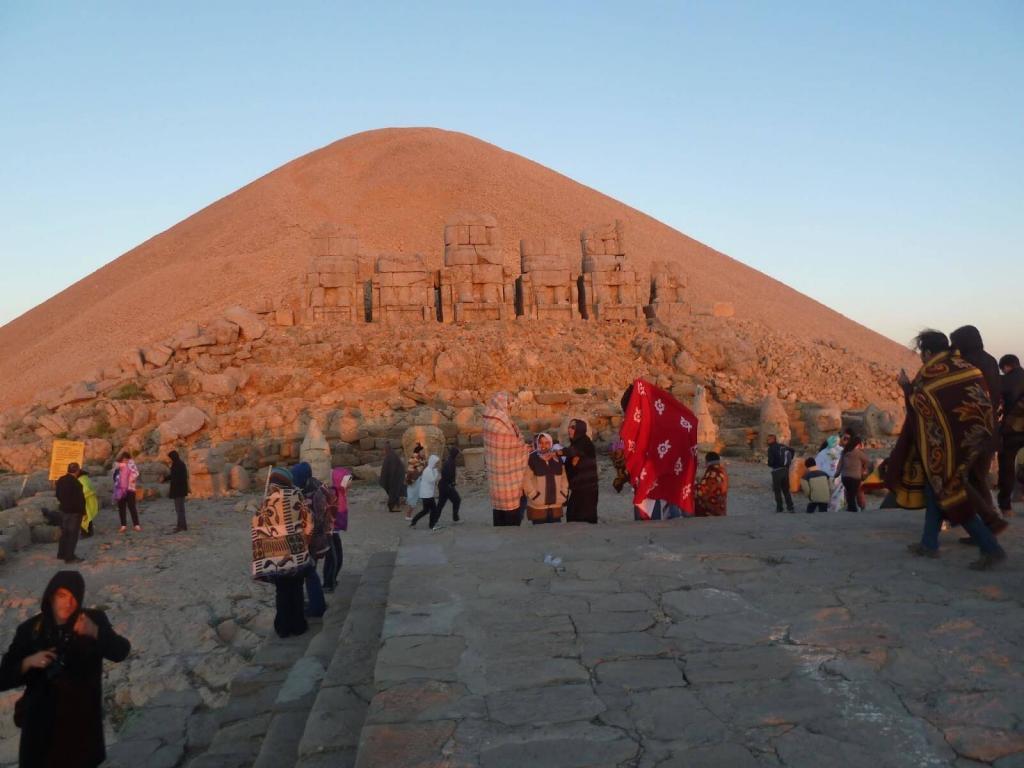 There are excavations in Arsameia Samsat and Euphrates river valley (Fırat) other than Nemrut Mountain to unearth the Kingdom of Commagene. The transportable artifacts that revealed from the excavations were in the Adıyaman Museum and the rest were taken into protection in the National Park area.

*** This information was obtained from the Adıyaman brochure of the Ministry of Culture and Tourism, General Directorate of Promotion.

The Antiochos Tumulus is 150 m width and 55-56 m height in the middle of the eastern, western and northern sides. It was built by putting up the wall with crushed stones in the size of a fist. It maintains a monumental tomb of Antiochos on an artificial hill and base.

There are terraces which were carved on four sides of the hill. We do not see it today because the terrace in the south has ruined. The terraces in the north, east and west are still in there. There is an altar at the front of the eastern terrace. The sculptors are aligned in the back of the tumulus. Some of the huge sculptures’ heads are standing on the ground in front of the terrace. The bodies are about 10 meters in height and sit on the seat. From left to right we see Apollon, Mitra, Helios, and Hermes, the goddess of fertility of Commagene Tyche-Fortuna, the chief god Zeus, Oramasdes, and King Antiochos, Heracles, and Ares sculptures.

We see the eagle and lion sculptures on either side of the statues. On the underside, on the lower part of the wall, there are King Macedonian ancestors on one side and Persian ancestors on the other. There are inscriptions here. These papers were informed about the ceremony. The people sat on 8 cut stone. The heads on the ground are quite damaged. There are cracks in the majority of sculptures. For the reason that it is over 2000 meters above, the nights are always under zero degree. Therefore, the water leaking into the cracks breaks it because it is transformed into ice below zero degrees at night. In this way, if the sculpture remains unprotected, I believe that it will disappear in 30-40 years. I think that this issue should be addressed by those concerned…