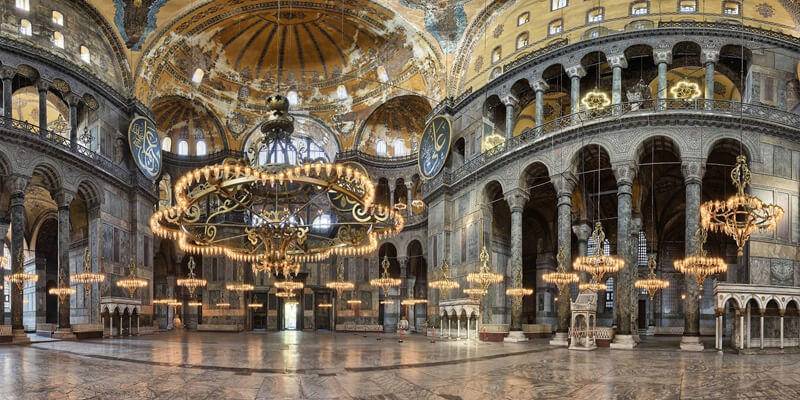 A great adventure to explore Byzantium Relics in Istanbul. If you come to Istanbul by cruise ship and stop in Istanbul Cruise Port for a Day or overnight stay, we will take you the deepness of Byzantium history which lived here before the Ottoman Empire. You will see the best preserved historical sights of Byzantium Empire such as Chora Church, Old fortification city walls and the must seeing monuments, Hagia Sophia.

According to your cruise arrival time, our transportation service will meet you with a board your name is written on it at Istanbul Cruise Ship Port, and then you will be driven through along the shore and passed to Galata Bridge where you can take nice pictures over the sea. After passing the Galata Bridge, continue to drive through the Golden Horn to Chora Church that the tour will attract you Byzantine structures. The places you will see during the tour;
Chora Church; the building, which is referred to as the Chora Museum, is a church structure that is the centre of the Khora monastery, a large building complex during the Eastern Roman Empire and dedicated to Jesus. The name “Khora”, which means “rural area” or “out of the city”, was approved because it was outside the walls of Constantinos.
The Byzantine City Walls; it was the largest fortification of the ancient world that was a series of the defensive system in old Istanbul and also surrounded and protected to whole Byzantium.
The Ancient Hippodrome; it was center of sports in ancient time which has three monumental structure; Obelisk of Theodosius was brought from Karnak Temple (Egypt). Bronze Serpentine Column, is a bronze pillar built in the ancient city of Delphi. German Fountain of Wilhelm II was constructed to commemorate the second anniversary of the German Emperor Wilhelm II.
Hagia Sophia Museum; It was first called “Megali Ecclesia” which means big church because it is the biggest church in the city. The building, which is also called “Thea Sophia” for a short time, is called “Hagia Sophia”, which means holy wisdom since the 5th century. It is a structure that you will admire the massive dome that amazes even the people of our age.
The Basilica Cistern; which resembles a pillar forest rising from the water, was built by the Byzantine Emperor Justinian in 542 AD.
The Grand Bazaar; the aim of the original construction was to make every street serve people, separated by different professions. Although some originality has been preserved today, there have been differences in the construction after earthquakes and fires. While the Topkapı Palace was the brain of the empire during the Ottoman Empire, the Grand Bazaar became a heart.
At the end of the Istanbul Shore Tours, you will have time to shopping according to your cruise departure time.

According to your Cruise Ship departure time, you will be transferred back to Istanbul Cruise Port.