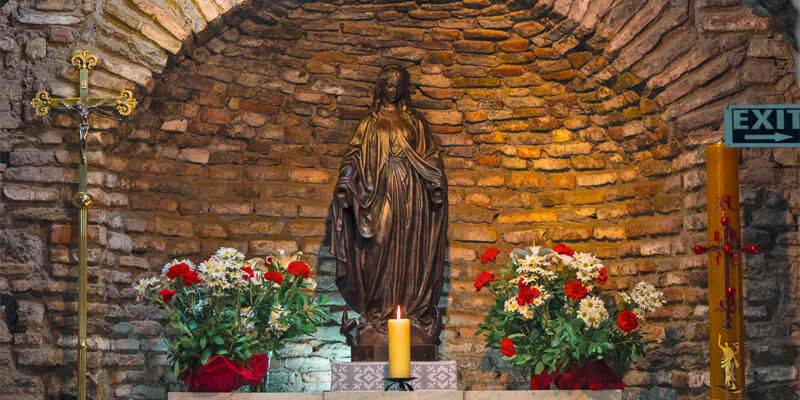 Our professional tour guide will meet you at the cruise ship pier to explore the Ephesus. Founded by the Amazons, known as female warriors in 6000 BC, the city is steadily attracting more and more attention with its historical background. Also to day we will visit House of Virgin Mary where she spend last years of her life on the Bullbul Mountain and The Temple of Artemis which was the one of the seven wonders of World

According to your arrival time to Kusadasi Cruise Port, You will meet with your tour guide at the pier and drive to Ephesus Ancient City. Today our first visiting place will be Temple of Artemis, one of the Seven Wonders of the Ancient World. Artemis, known as a famous goddess in Greek mythology, is called “Diana” by the Romans. It was built in Ephesus in 500 BC for the fertility goddess, Artemis. The Temple of Artemis, built by the King of Lydia Krosisis, was completed in 120 years. It’s made entirely of marble. You will continue to Celsus Library. The most well-known structure of Ephesus, the Celsus Library, was built between 100-110 BC by Gaius Iulius Aquila, the son of Senator Tiberius Iulius Celsus, to honor his father. The Great Theater of Ephesus, one of the greatest ancient theaters in the world, was first built in the 2nd century BC. During the Roman Empire period, it was expanded and hosted stage shows, concerts, artistic and athletic competitions.
We will visit the Bulbul Mountain where the House of Virgin Mary’s House is located. It’s the mountain where St John’s built a house for Mother Mary. According to some considerations, Mother Mary go to the happy hunting grounds from this mountain.
Before going back to your hometown, you can buy gifts for your loved ones. Thank you for choosing us. At the end of the tour, you will be transferred to the Kusadasi cruise ship port.