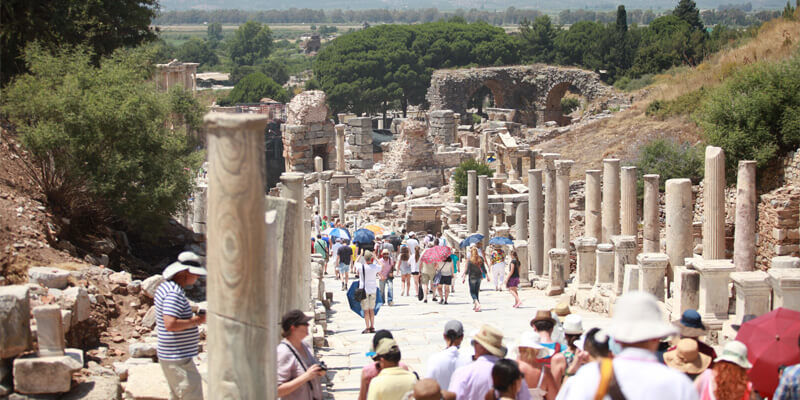 The tour will be the best in Ephesus, the most magnificent ancient city on the western coast of Anatolia. In the place that can be considered as the most suitable location of the Aegean, every point of old history will take you to other realms. Not only Ephesus but also the enormous buildings around, the tour will offer you a holiday opportunity that you have never experienced before.

Highlights of Ephesus Tour from Cappadocia

The rest of the day is free. You can explore one of the most stunning holiday centers in Turkey.

08:30 am ─ You will be picked up from your hotels in Kuşadası.
You will be transferred to the ancient city of Ephesus.

House of Virgin Mary
The house of the Virgin Mary near Bülbül Mountain, near the ancient city of Ephesus, is a sacred place where both Christians and Muslims are most sought after with its historical, cultural and archaeological structure. It has been declared by Pope IV Paul as an official pilgrimage center for the Christian world. Every year, the Virgin Mary House has visited tens of thousands of Catholic Christian pilgrims. It is believed that Mary spent the last years of her life in this house.

Terrace Houses
Terrace Houses, which is still continuing its restoration works, is described as The World’s Greatest Puzzle. There are approximately 40,000 pieces in about 80 cases, and only 100 of them can be combined each day. The hillside houses were abandoned after a major earthquake in 262 AD. Destructed walls and ceilings have been a natural protection for the mosaics dating back to 230 AD. At the same time, drinking water was flowing in the mosaic walled fountain. Next, to the dining room of the house, there is a pool where the fish swim. So they choose to fish from here when they want.

Temple of Artemis
The temple of Artemis is thought to have 127 columns, each 17 meters high. According to Sidon’s Antipater; The Temple of Artemis was even more spectacular than the Statue of Zeus, the Hanging Gardens of Babylon. When the Antipater sees the Temple of Artemis, it expresses that all other beauties have lost their luster. The temple, where the gigantic image of the sun and the great workmanship of the high pyramids is reflected, has not survived to the present day.

Saint John Church (Expression from Temple of Artemis)
Saint-Jean, one of the 12 apostles of Jesus Christ, is buried at Ayasuluk Hill after his death. On the tomb, a church with a wooden roof was built in the 4th century. During the Byzantine Emperor Justinian period (527-565), an unprecedented new one is taken to replace the first church. Ephesian was speechless in the face of the grandeur of the building.

The Ephesus tour from Cappadocia will be ended.
Choose us for the best price and service guarantee!