Discover Of Christian Ephesus In One Day 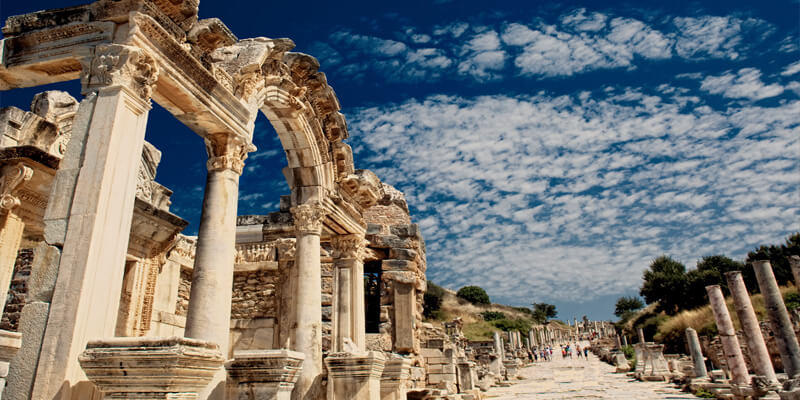 We are able to provide a day tour to Ephesus Ancient City and Virgin Mary House from Kusadasi Port. If your Cruise Ship stops in Kusadasi Cruise Port for a day or 6-7 hours, you will be able to get out for feeling history. We promise you to be impressed by Ancient City of Ephesus and history of the Virgin Mary.

After arriving at Kusadasi port passenger terminal, the tour guide will be waiting for you there. After meeting with your well experienced Ephesus Tour guide, You will continue to the House of Virgin Mary. When Jesus was crucified in Jerusalem by the Romans, he was 33 years old. Jesus, before drawing his last breath, sends his Mother Mary to his close friend Saint-Jean. St. Jean brings to Ephesus, one of the famous cities of that time, thinking that Jerusalem might be dangerous for the Virgin Mary.
You will also visit Ephesus Ancient City, one of the most magnificent and best preserved ancient sites in the world. It’s a unique city. According to ancient legends, Ephesus founded by Amazons. Efes is a city that has become a capital of trade, religion, and culture in its strong times. You will see Odeion, built in 150 AD by Publis Vedius Antonius, a rich Ephesians, is a theatre-like structure. And other places to visit are Curetes Street, Celsus Library, Marble Street, and Great Theatre which has 24000 seating capacity.
After having a delicious lunch, you will start exploring Camlik Village. Çamlık is a neighbourhood of Selçuk district of İzmir. Camlik Steam Locomotive Museum exhibits 30 steam locomotives made by German, British, French, American, Swedish and Czechoslovak. These include a British-made locomotive working with wood, which has only 2 in the world.
Basilica of St. John is in your destination. It is the church of the writer of Bible John’s grave. There are six large domes in cross planned church. It was built by Emperor Justinian and his wife Theodora. The last place to visit is Temple of Artemis. The temple dedicated to the goddess Artemis was completed in Ephesus in 550 BC. The temple was built with marble. Only one or two pieces of marble are left behind today, which is considered one of the seven wonders of the world.
If there is time, you can buy gifts for your loved ones.
According to your Cruise Ship departure time, you will be taken back to Kusadasi Cruise Port.