Explore Ephesus Ancient City in Half Day From Cruise Ship 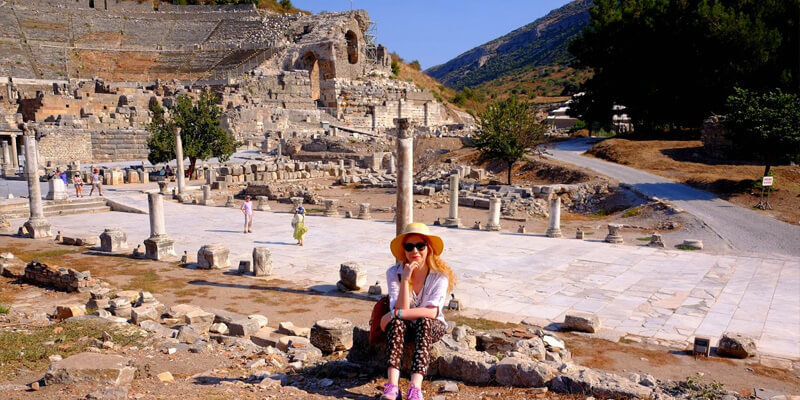 Half Day In Ephesus Ancient City From Kusadasi Port

In this tour, you will admire the fantastic landscapes of Ephesus. This tour is operated with a professional English-speaking professional tour guide for ease of communication. The tour guide will be waiting for you to visit the Ephesus.

According to your arrival time to Kusadasi Cruise Port, you professional tour guide will be waiting for your at the Kusadasi Port and you will start the Half Day morning or afternoon Ephesus Tour.
The first place to visit is Temple of Artemis. Artemis, known as one of the seven wonders of the world, is located inside the ancient city of Ephesus, located in the Selçuk district of İzmir. The Temple of Artemis is known as a Greek Temple dedicated to the Goddess Artemis. The last remains of this temple are located in the ancient city of Ephesus.
The second place to visit is Ephesus Ancient City. It is an ancient Roman city and an ancient Greek city. You can still see the traces of all the civilizations because of the presence of the Temple of Artemis, one of the seven wonders of the world, and the hosting of different cultures. Established in the 6000 BC by the Amazons, known as female warriors, the city is steadily attracting more and more attention with its historical past. The ancient city of Ephesus, which lived golden age during the Hellenistic and Roman periods, become a capital during the Roman Empire period. The largest open-air theater, the Ephesus Grand Theater, is the most important structure with a capacity of 24,000 people. The Celsus Library is the third largest library in the world after Alexandra and Pergamon.

After the magnificent Ephesus Tours From Kusadasi Cruise Port, you will be taken back to your Cruise ShipWe hope you will enjoy this trip. thank you for choosing us.