Pamukkale and Ephesus Tour From Istanbul 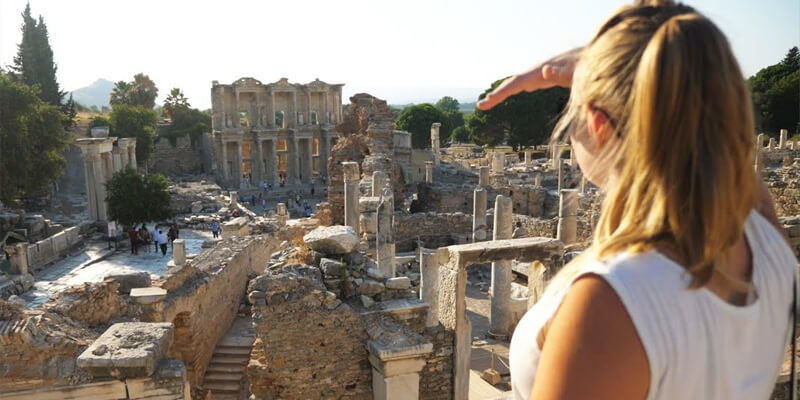 You will get a chance to see the ancient marble city Ephesus, where you will take great frames. The ancient city of Ephesus, which dates back to 6000 BC, was an ancient city belonging to Rome, Greece, and Turks in different periods. Inside the Temple of Artemis, a House of the Virgin Mary and the Companions of the Cave Artworks have this extraordinary work as one of the most important tourist sites in Izmir and Turkey, located in the town of Selcuk. Ephesus, the Hellenistic and Roman times had the most brilliant times. During the reign of the Roman Emperor Augustus, the population of the province of Asia reached 200,000 people.

Thanks to Pamukkale tour will have the opportunity to see one of Turkey’s most spectacular natural beauties. You will have a nice time in white paradise without any other examples in the world. During the tour, you will see travertines, the natural beauty of Pamukkale, the ancient city of Hierapolis, a symbol of the past. The memories you will experience with this tour will not be forgotten throughout your life.

Highlights of Pamukkale and Ephesus Tour From Istanbul

03:30 am ─ Our staff will come to your hotel and they will transfer you to the airport in Istanbul. (If you are already at the airport, you can fly directly.)
06:55 am ─ You will fly from Istanbul to Denizli.
08:10 am ─ Landing to the Denizli Airport.
Our staff will pick up from the airport and you will be transferred to Pamukkale.

The first stop of the tour to Pamukkale will be travertine known as white paradise. The short tour here will be to walk on the hot waters. Don’t look at us as short as that. Living this moment can be the most beautiful thing in your life. The tour guide will accompany you throughout the tour. You will learn everything you need to know or wonder. After the tour is over, you will have the opportunity to see the ancient city located right next to the travertine. The work of the ancient Roman period will create a very exciting moment.

The Hierapolis Theater is one of the most magnificent buildings dating back to the 2nd century. To date, the well-preserved ancient theater has offered entertainment to approximately 10,000 spectators. In addition to religious ceremonies in the theater, music has taken place in live entertainment. As one of the places that open the doors of the old world in the best way, every minute you spend here will give you experiences you cannot see in other places. You can take pictures to immortalize the moment in the surrounding seats.

Old people who have been the most fun time to shop in the old world known as Agora. The site, which offers a great marketplace for ancient civilizations on the Aegean coast, is an old market where most of the population comes to shopping or trade well with other people traveling. The marketplace is only part of the city. There is also the Necropolis nearby Agora. This cemetery is a place where many foreigners are buried in different time periods.
After the journey back to the past, Karahayit Red Springs will be our last stop. These Karahayıt hot springs, considered to be a branch of Pamukkale thermal springs system, are located in the town of Karahayıt. The composition of the water is similar to the Pamukkale source. However, the temperature is higher and free carbon dioxide is less. The waters of the spa, which has high radioactivity, emerge from three sources. Water temperatures of the sources are 500 C, 425 C, and 560 C. The height of the spa area is 950 m above sea level. The characteristics of hot spring water are hyperthermal, hypotonic mineral water. There are bicarbonate, sulfate, carbon dioxide, calcium.

16:00 pm ─ The Pamukkale tour will be ended. Continue to drive to Kusadasi. Upon arrival at Kusadasi. You will be transferred to your hotel in Kuşadası.

08:30 am ─ After having breakfast and checkout from the hotel, you will be transferred to the Ephesus Ancient City.

Being a gate between East and West, Efes was also an important port city. This feature made Ephesus an important trade and political center at that time. It was included in the UNESCO World Heritage List in 2015. Besides, the biggest temple of Artemis culture which is based on Anatolia’s old goddess tradition is located in Ephesus. Ephesus, which has a very important place in history and today, has developed famous names like Herakleitos, Artemidoros, Hipponaks, Zenodotos, and Soranos.

Another place to visit during the tour is the temple, which is one of the oldest buildings in the world. The Temple of Artemis or Artemision, originally known as the Temple of Diana, was a Greek temple dedicated to the goddess Artemis. The ruins of the temple are located in Ephesus.
The ancient city of Ephesus is one of the oldest buildings in the world with the least disturbance rate. The temple, one of the Seven Wonders of the Old World, was completely rebuilt three times before its last destruction in 401.
Today, only the foundations of the temple and the pieces of sculpture in the temple remain. The first sanctuary of the Temple of Artemis was based on the Bronze Age, where Ionian migration began. In the 7th century BC, the old temple was destroyed with a flood. It was rebuilt in 550 BC by the Cretan architect Chersiphron and his son Metagenes in Lydia Bay. The project took 10 years to complete. The temple was destroyed by an arson attack in 356 BC and then rebuilt.

Before his crucifixion at the age of 33, Jesus entrusted his mother, his friend St Jean, who was also an apostle. St Jean found it inconvenient to remain in Jerusalem due to the Roman persecution of Mary, and, together with Mary, came to Ephesus, the largest and most peaceful city of the age. It was a sacred duty to spread Christianity. Jean protect Mary from the public and concealed it in a hidden tree-lined hut on Mount Bülbül. It is believed that the last days of the Virgin Mary were spent in the House of the Virgin Mary, which was declared sacred by the Vatican. Christian historians state that Mary lived on the Bülbül Mountain until the age of 101 and that her grave is also in a place where no one knows her where she is at.
In 1967, Pope VI Paul conducted the pilgrimage visits in 1979 by Pope John Paul II and also recently by Pope Benedict XVI. Every year on the 15th of August, there is a ceremony that the day believed for the Mary’s death day. On the day of Mary’s death, the Vatican organized a large ceremony.

The building, which has an important place in the period of Principalities, has a plan arrangement which is not used much except a few examples in Anatolian Turkish architecture. The principles of this new plan scheme, which will have significant impacts on Anatolian Turkish architecture starting from the period it belongs to, are based on Islamic architecture in Syria and have an old history that goes down to Damascus Emeviyye Mosque.
The novelty brought by this application from the architectural point of view is the porch that joined the mosque. In addition, the structures, as well as the decoration of the Zengi and Mamluk effects are noteworthy. This structure, which forms a synthesis of different cultures, has also been the source of Ottoman architecture.

2-Days Pamukkale and Ephesus tour from Istanbul will be ended.

The price of the tour covers hotel accommodations as mentioned above or similar quality hotels.

Option 1: We can upgrade your hotel accommodation according to your request at an additional cost.

Option 2: If you would like to book your hotel, we can cut mentioned hotel price out. And, we can quote a new tour package price without the hotel.

You can book the tour directly online if the mentioned hotels are suitable for you. If not, please make a request.