Troy (Troya or Toria) is mentioned in Homer’s Iliad and Odyssey epics. And today, one of the most important cities in the history is located near Tevfikiye Village in Çanakkale.

The ancient city of Troy can be considered as nine historical stages. It has been destroyed by natural disasters nine times during its existence. For this reason, the city can distinguish 9 stages. These nine stages involve an average of 5000 years of the city. With help of its location, Anatolia is located on lands where like as a bridge between east and west. With this strategic position, Troy has always been the target of many civilizations. It was an area where established agricultural communities and is a cultural center for people in the kingdom, with the help of the location.
Due to Troy’s position, it caused many wars and was ruled by the Persians, Alexander the Great, the Seleucids, the Pergamon Kingdom and the Romans.

Troy is one of the important excavation areas for archeology. It was discovered in the 1870s by the German archaeologist Heinrich Schliemann. In 1998, it was added the World Heritage List of UNESCO.

Stage I of Troy

The First Stage, which belonged to the Early Bronze Age and consists of ten layers on top of each other, Troy includes a small area of about 90 meters. Its history based about 3000 to 2500 years ago. The walls of this stage are well preserved. At that time, two towers accompanied the main entrance in the south. The most important structure of this stage is the house 102 in the north. This house is in the style of a front room and a large room with a megaron (it has an oven inside with a wooden roof and has a square interior with a front deck). This style of structure pioneered the ancient Greek temples. And this house is one of the examples in the First Stage. There are also tripod-basins, pottery with geometric motifs and schematic figures made of limestone or marble. This layer has disappeared as a result of a great fire. 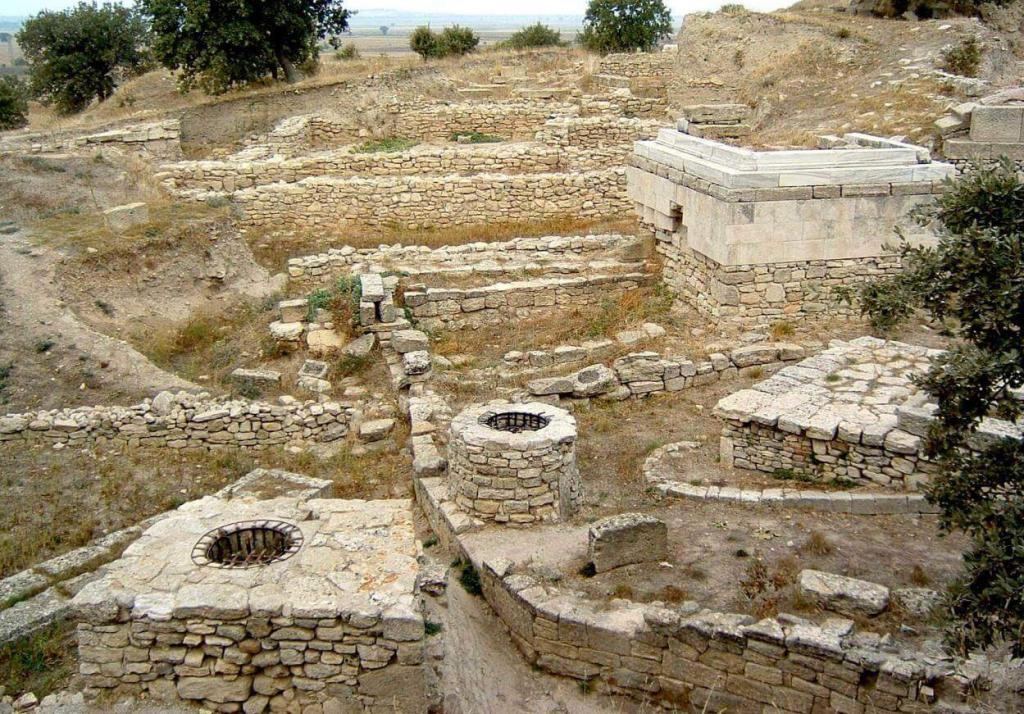 The Second Stage was an important place in the history of Troy. It has an area of 110 meters in Troy and consists of 7 building levels. New walls of the city were built in the three main periods. The large megarons were arranged side by side by being an architectural side at the monumental entrance. With this arrangement, the settlement became an important place in terms of urban planning. This urban planning has also been applied in the later Ancient Greek cities. Together with the megaron-style houses, Troy’s culture was maintained after the First Stage.
In this stage, many silver and gold were found with vessels and tools made of bronze and copper. This important stage has been destroyed as a result of an invasion. 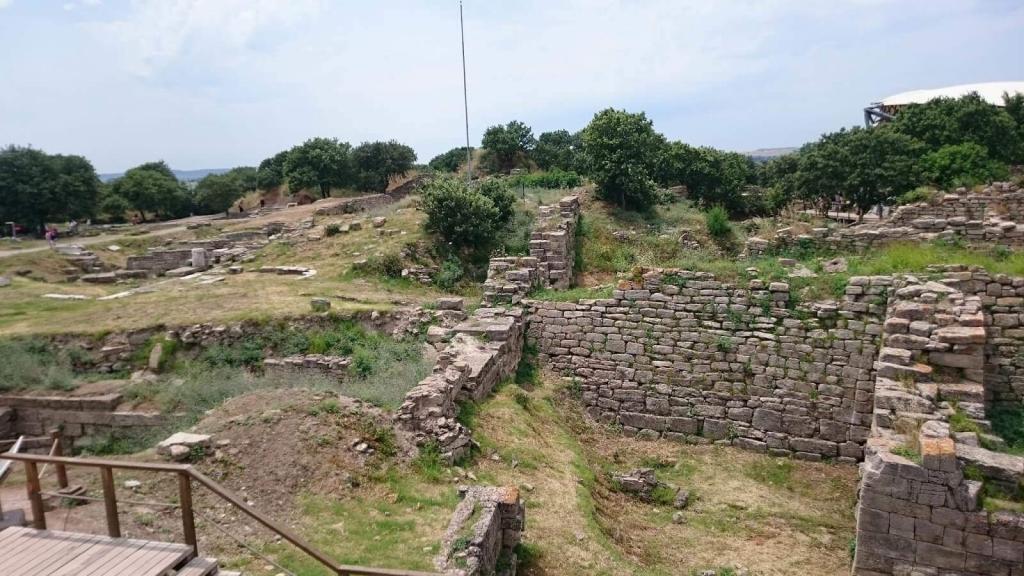 Starting from the Third Stage (2200-2050 BC), it began to destroy the brightest era of Troy until Fifth Stage. The lifestyle has not changed much in this layer which consists of 4 buildings level and the bright age began to disappear. The ruins in the stage are generally small houses built with rubble stones and side by side narrow streets. The walls were built entirely with stones. No significant improvements have been made in the small ruins. New vessel forms, pot-like beak-mouthed, bell-shaped stoup, and bowls were found. There are few wheel-made vessels thought to have been built for the rich.

The Fourth Stage, which constituted the last settlement of the Early Bronze Age, was constructed from 5 buildings level. Also, there are no city walls on this stage. In the courtyard of the house was built contiguous adobe arrangement on the stone foundation which was clay-floor, a dome-shaped oven was unearthed.

The Fifth Stage, which was the transition to the Middle Bronze Age, has 6 buildings level. The houses in the settlement, surrounded by a simple fortification, were largely similar to the fourth stage architecture. However, the structures were smoother, more organized and the sizes of the houses were larger than the other stages. In fact, the number of ovens like beehive, artifacts and domed furnaces had increased inside the home. These increases and changes show the changing in lifestyle, a development.

The Sixth Stage consists three main periods and 8 buildings level. The fortification walls and houses was a product of superior workmanship.

Extant fortification walls consist of six sections linked with five doors. The most solid part is the first section. Along with the monumental tower, this section is 8 meters in width and 18 meters in height. The tower, which was 9 meters in height at the time, is a watchtower that people could watch the entire plateau, including the Acropolis. In the center of the tower, there is a cistern carved into the rock and surrounding an 8 meter deep well. The second part, which draws attention with its quality workmanship, is located in the south of the 1st section. From 2nd section, the part which is 41.5 meters in length, 4.5 meters in thickness and 4 meters in width remains today.The southern part of the third section, 90 meters length and extending southward, was partially destroyed by the grikes of Bouleterion and Schliemann. However, the eastern part is quite solid nowadays. 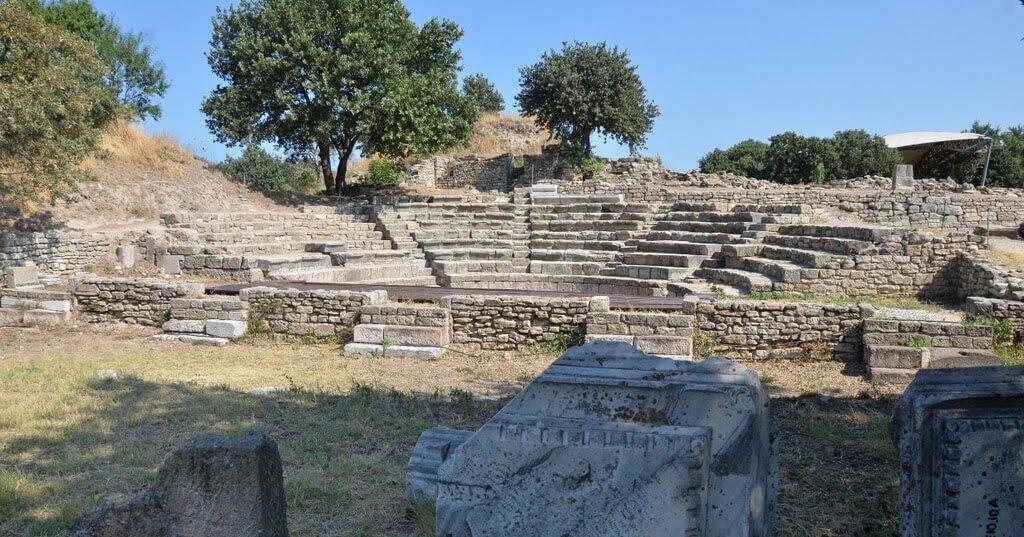 The fourth section, 121 meters long, is in the south. The most important structure in the sixth stage is the large moat located on 450 meters north of the fourth section. Part 5, is half the thickness of the other sections and built with small stones, preserved its original form until today. The 6th section is in the north of 5th section, and only the bottom has been revealed in excavations. The upper part was destroyed during Hellenistic and Roman periods.

At the top of the hill, there are important buildings and palaces of the 6th Stage. The buildings of the Acropolis of the 6th stage were built in the Hellenistic period, with stoas and the Temple of Athena. However, it was destroyed during the expansion in the Roman period. Schliemann destroyed completely the undamaged parts. Despite all this, the structures revealed by the excavations are very interesting. 6th Stage is considered to be the most extraordinary and most beautiful of the cities of the whole ancient world, with its well-built buildings and city planning and the walls built with the elaborate workmanship. The Trojans had a high level of cultural experience during that period. 6th Stage Troy, which is described as the golden age of the city, has been destroyed by a major earthquake.

In addition, some of the remains found in the excavations show that this period has been destroyed by a war, perhaps legendary Trojan War. Human bones were found in the houses and on the streets. In addition, the skeletons of the northern western walls have broken jawbone and head stones. Three bronze arrowheads were found, one in the city and two in the fortress.
Archaeologist Ekrem Akurgal states with historical proves that this stage is not the time when Homer’s Iliad was revealed. In this stage, he says that they have restored ruined houses and fortification walls and that the houses are of poor quality. There was also a change in architectural and planning systems. He emphasizes that the artistic details and criteria are much lower than the 6th stage. He mentions that incomplete and irregular houses cannot be compared with houses on the sixth stage.
It is not clear that the legendary battle written by Homer was destroyed. The 7th Stage was destroyed by the Greeks.

After the Greeks invasion, the Trojans who returned to home repaired the city walls and houses. In this period they continued to produce their ceramics and their previous bright cultural lives. However, this period has been ruined as a result of the fires.

In this period, there had been a cultural change in Troy for the first time since the 6th Stage. There were buttoned bowls and similar ceramics different from the others. This grayish-colored, angular handled and horny protruding pottery revealed on only the Balkans until this period.
There were differences not only in ceramics and pottery but also in the construction of buildings. The lower lines of the walls were supported by large stones called ortostat, just like in the Balkans. This information shows us that the Balkan people lived in 7th Stage B2. This layer also disappeared as a result of fires as it was in 7th Stage B1.

The most important structure built in the Hellenistic period, the Athena Temple, is located in the south-east of the city. Homer refers to this structure in his works. This building, which belonged to the time of Alexander the Great, was built during the reign of Lysimachus, one of his commanders (323-281 before Milat). Today, a pit, dug with only the parts inside, has been built from the temple which was built in the Doric order. Parts of this temple can be seen at Troy Museum.

The remains of Ninth Stage belong to the Roman period. The Romans attached great importance to Troy because they believed it was the granddaughter of Aphrodite’s son and Trojan War hero Aeneas. Although the Roman Emperor Julius Caesar (100-44 BC) offered sacrifices to this place, the concrete plans there were realized by Emperor Augustus (63 – 63 AD).

During Augustus, many new buildings were built. In addition, the temenos of Athena Temple has been expanded. All four sides of the temple are surrounded by 80-meter-high columns. While these constructions were being built, important structures of the Sixth Stage and houses of the Seventh Stage were destroyed. Roman walls were also built during this period that covering the Seventh Stage gate. Another structure belonging to this period is the Monumental Entrance to the south of the temple. Many Roman structures were built between the Temple of Athena and the city walls. Bouleterion (Theater B / Parliament Building) and Theater C, which are located on the east side of the main entrance of the Sixth Stage and built on the walls, belong to the Roman period.

Tours CE is a travel agency in Istanbul. We can make itineraries for you or you can choose your tour program between ready itineraries. For any question, please don't hesitate to contact us.
Previous Konya
Next Aspendos Ancient City 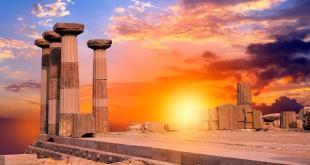