The palace is one indispensable point of Places to visit in Istanbul for curious travelers to history and architecture. The Topkapi Palace is fascinating to visitors with its splendor for centuries. In the first years of the Republic, it became one of the biggest palace-museums in the world. Topkapi is waiting for you with its sections designed with architectural understanding similar to the Ottoman nomadic cultures and the invaluable collection. 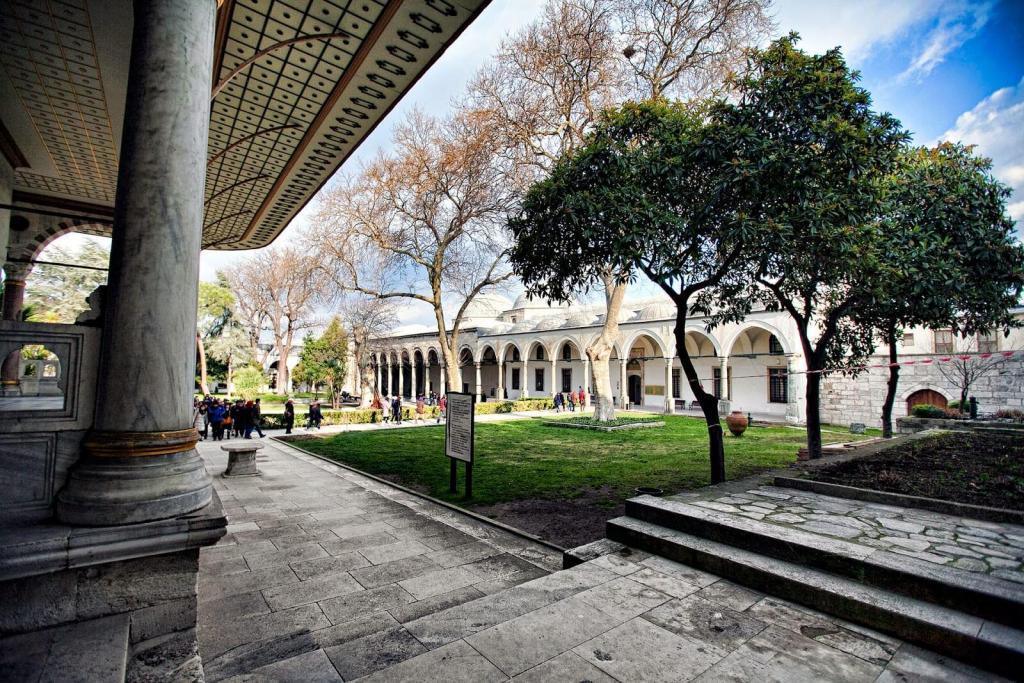 It was built on an area of 700,000 centares on the Eastern Roman Acropolis in Sarayburnu in İstanbul. The construction of the Topkapi Palace began in 1460 with the order of Fatih after the conquest of Istanbul. The palace was, completed in 1478, used as the administrative, educational and artistic center of the Ottoman Empire for about 4 centuries.

It is entered via the Royal Gate in direction of Haghia Sophia. The magnificent structure consists of 4 intertwined yards. Today, the palace, around 300,000 square meters, is surrounded by large gardens and squares. Within the gardens surrounding the palace, a number of buildings were built over the time, mainly Tiled Kiosk, Basketmakers’ Kiosk and Pearl Kiosk. 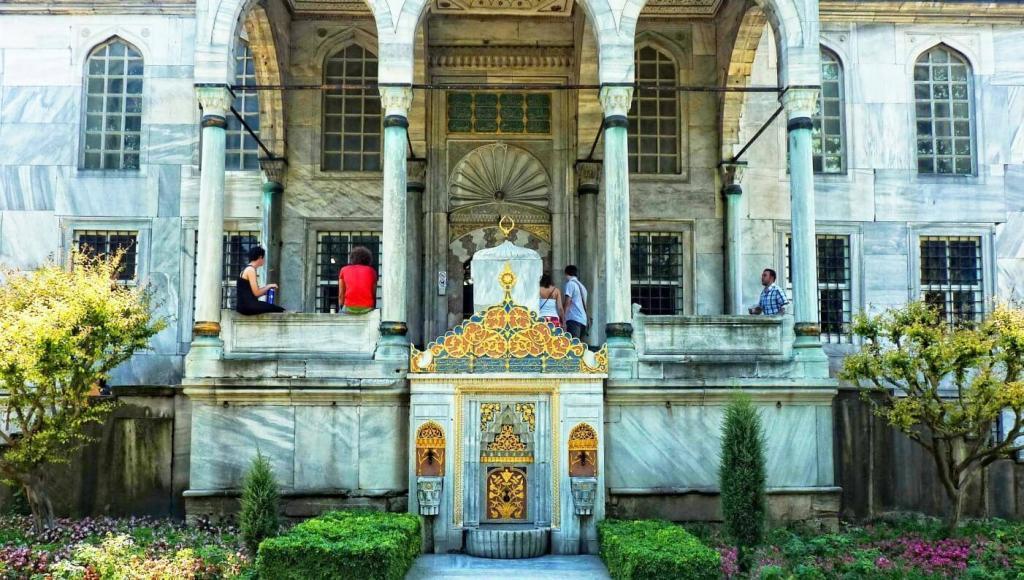 In the middle of the 19th century, the palace lost all its function, after the dynasty moved to the Dolmabahçe Palace. The palace has been turned into the first museum of the Republic of Turkey on April 3, 1924. In the 300,000-piece collection of the museum, there are unique pieces of cultural significance, such as porcelains, kitchenware, silverware, portraits and special items from the sultans and imperial treasures collected from all around the world.

The palace, which has been used as a museum since 1924, consists of 4 courtyards and a harem section.

In terms of the area covered, the largest of the courtyards is the First Courtyard (Alay Meydanı). Alay Meydanı, which is located in the first courtyard and which is surrounded by the outer service buildings, was used in ceremonies such as Friday Selamlik during the campaign of the sultans. Since it was used as a weapons and trophy repository, the history of the  Hagia İrini, which was called “Cebehane” in the Ottoman period, dates back to the 4th century. It was used as a military museum at various periods. The religious structure consists of three sections and attracts attention with the mosaics beneath the dome.

Babessalam is now used as the main entrance to the museum. You can see that the Ottoman and European military architectural elements were successfully synthesized in this structure. The last structure you can see in this courtyard is Bab-ı Hümayun, whose religious motifs enriched its appearance and contains an epitaph dedicated to Fatih. 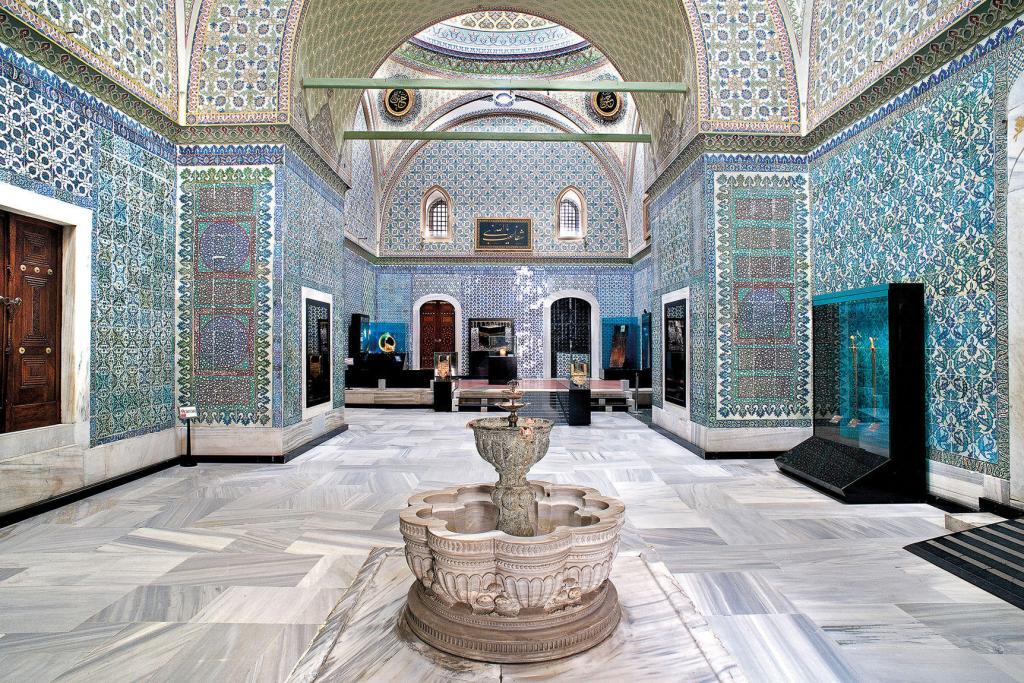 The second courtyard also called the Council Square (Dîvân Meydanı), was used as the administrative center and ceremonial area of the Ottoman Empire for many years. Kubbealti (Divan-ı Hümayun), where government affairs are discussed, is the most important structure in this area.

In the third courtyard, which is also known as Enderun, it attracts the most interesting The Privy Room (Has Oda) and then the room of Islamic Sacred Relics. There are sections belonging to publicity. The most striking sections of the pavilion style of Turkish architecture are Chamber of Petitions (Arz Odası) the 3rd Ahmed Library which was established for the lads of the interiors (içoğlanı) who were trained at the Enderun Palace School and Ağalar Mosque includes in the courtyard. 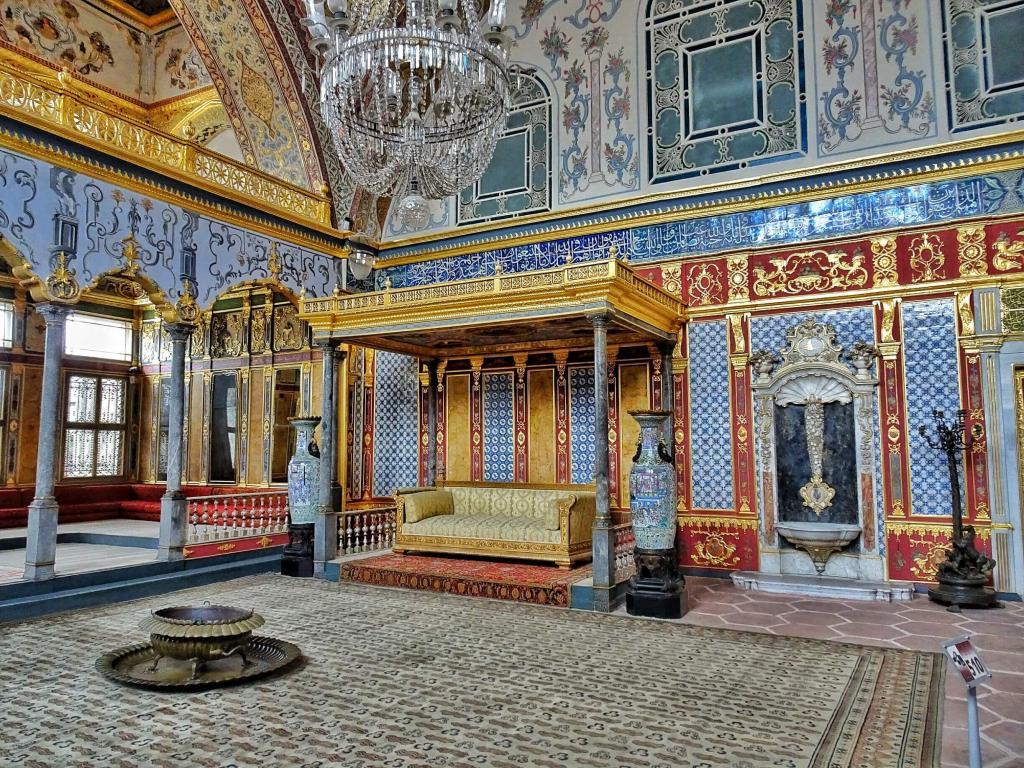 The fourth Courtyard consists of Tulip Garden and Sofa-i Humayun sections. Here are two pavilions built in honor of the conquests of Baghdad and Revan. The Mecidiye Pavilion in the area where the Circumcision Room (Sünnet Odası) can be seen which was used for summer pavilion for the sultan, carries the signature of the successful architect Serkis Balyan.

The section I spend most of my time visiting the palace is the Harem. According to me, those who want to understand the life of the palace is a place to see. You will be able to get a chance to see the Imperial Hall (Hünkâr Sofası), which is used as a ceremony and reception hall, the Valide Sultan’s Quarters where the mother of the sultan lived, Sultan’s chamber and the various groups living here. 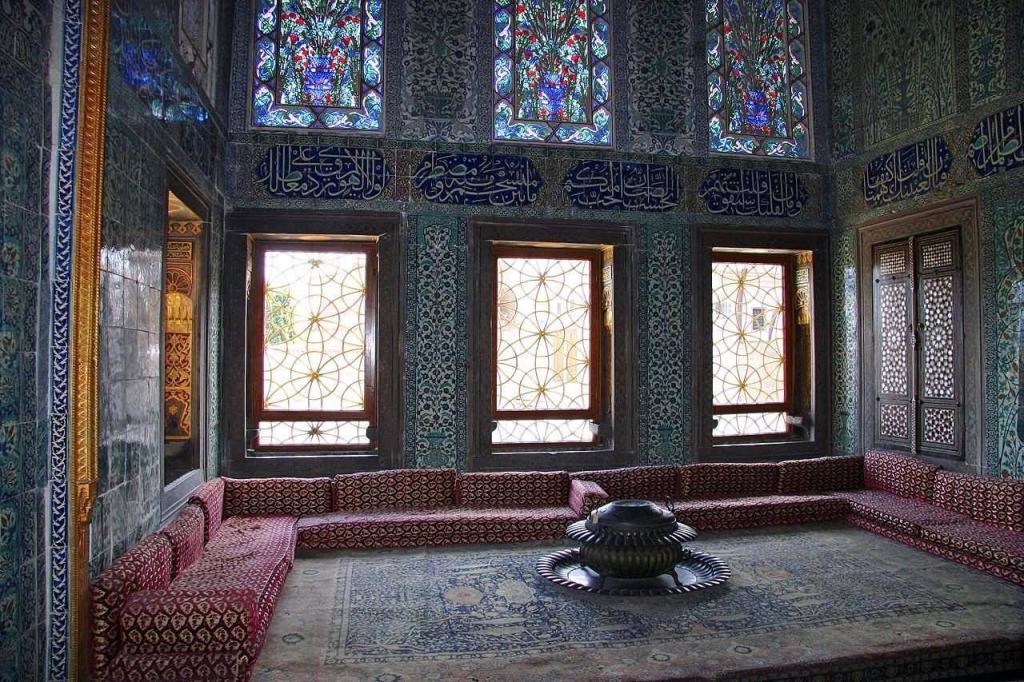 The Sultan Clothest Sections and the Treasury Halls and the 3rd Ahmed Library are temporarily closed for restoration. The Halls of Barn and the Physicians’ Pavilion are the only places completely closed.

Where is Topkapı Palace? How to go?

The Topkapi Palace, with its historical importance and unique collection, finds its place in the list of Places to visit in the Historical Peninsula. It is located within the borders of Fatih District. The Grand Bazaar and the Blue Mosque which are the historical landmark of the city are located very close. You can use the subway, tram and Marmaray lines to get to the museum.

If you are going to the museum by subway or tram, you should get off Sultan Ahmet Station. After passing the Hagia Sophia Museum and the Hürrem Sultan Bath, you can easily reach the palace by following the signs. If you prefer tram on transport, you can also get off at the nearby Gülhane station. 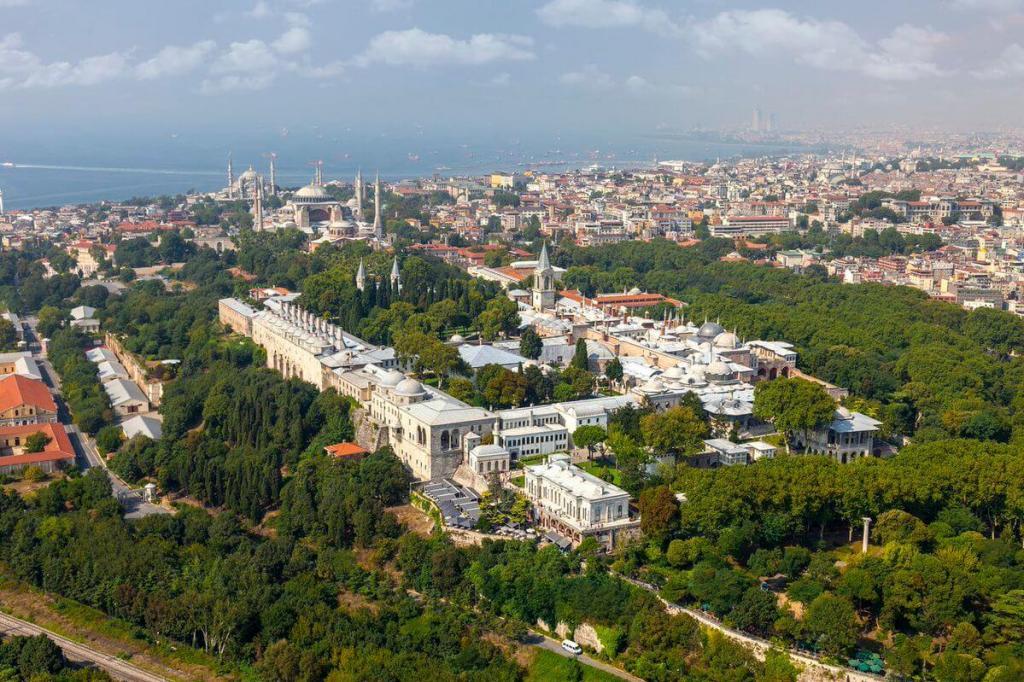 Those who use Marmaray to go to the museum need to get off Sirkeci Station and follow Cağaloğlu-Vilayet exit. Once you are in front of the Governor’s Office, you can follow the sweeping road to the left.

You can use the car park near Bab-ı Humayun Gate when you come to the museum in your private vehicle. In addition, there are park areas where the high school located.

Admission Charge of Topkapi Palace in 2018 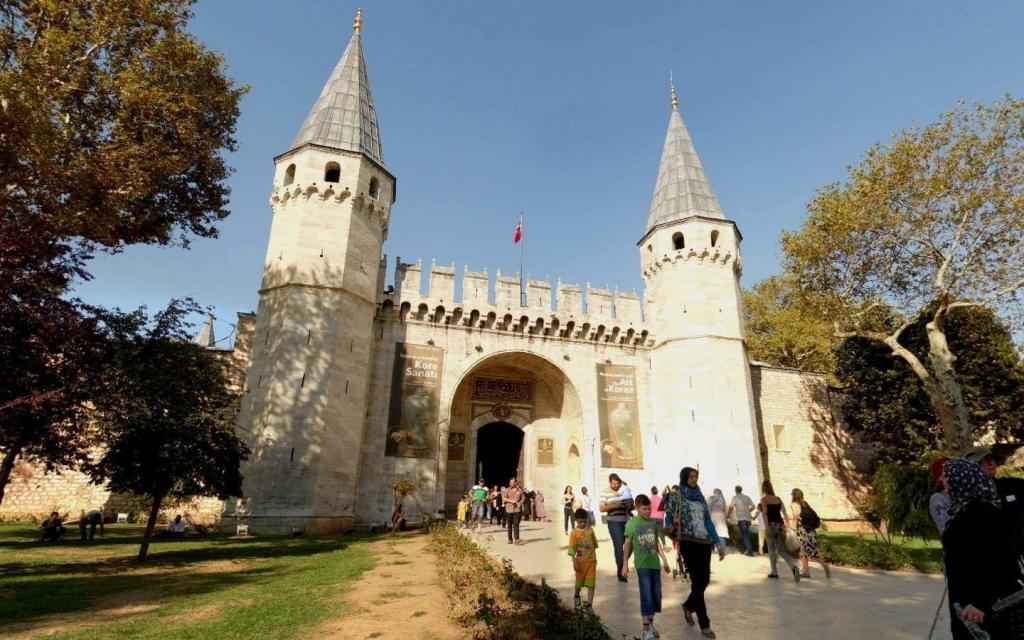 Turkish citizens under the age of 18, adults over the age of 65 and handicapped people can visit free charge. You can find detailed information about who can visit the museum for free and other areas in the palace at the official site of the museum.

If you do not want to waste time with cash-desk on busy days especially on holidays and weekends, you can buy your ticket online. At the same time, you can apply for MuseumPass, valid for museums in Istanbul, and Müzekart+, which is valid for all museums connected to the state. You can learn what you are curious about this system from muze.gov.tr. The greatest advantages of Müzekart+ and MuseumPass are free entrance to the museum, and they are entitled to special discounts applied in various areas of the facilities.

Müzekart is not valid at the entrance for Harem and Hagia Eirene.

The Topkapi Palace Museum is open every day of the week except on Tuesdays. The only one exception is that the museum is closed until 13:00 on the first day of the religious holidays. 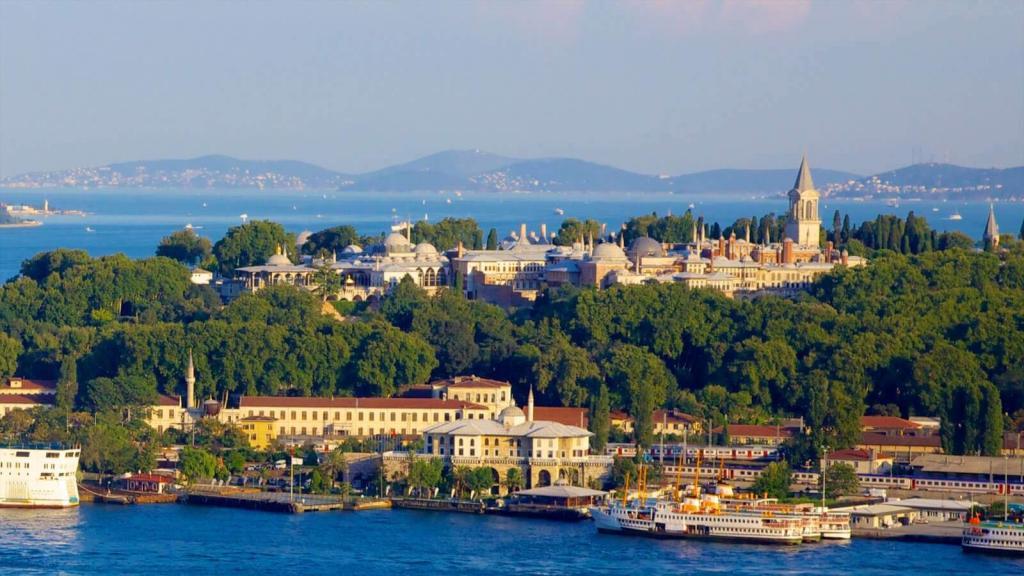 The visit times of the palace, the museum, the Harem and the Hagia Eirene are different in the winter and summer seasons all museums connected to the Ministry of Culture and Tourism. During the winter season from 30 October to 15 April you can visit the museum 09.00-16.45. During the summer season between April 15 and October 30, you can visit the palace 09.00-18.45. In both periods the ticket offices at the entrance of the palace are closed 45 minutes before the last visit time.