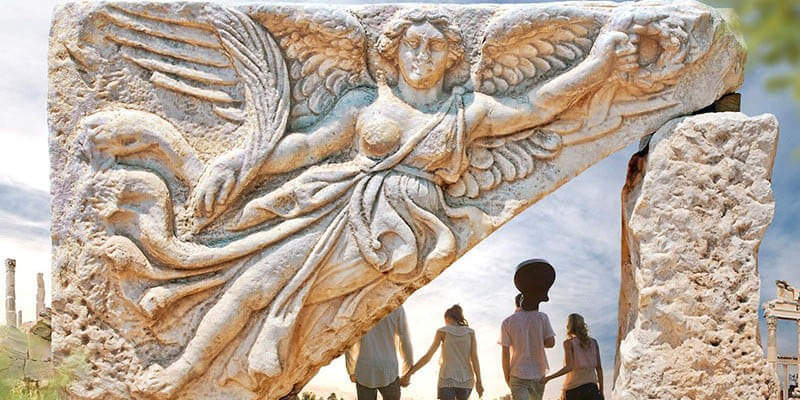 Our journey starting from Istanbul, one of the most beautiful cities in the world, will take the first step to the geography where the Turks are invincible in Anatolia. Then we will continue with natural and artificial beauties that Anatolia has presented to us. You will get a perfect holiday opportunity by traveling to places you have not been before in 10-days tour.

Day 1 - Drive from Istanbul to Gallipoli and Gallipoli Day Tour

Meal: Lunch
06:30 – Our transportation service will pick you up from the hotel you stayed in. Please note that pick up time may change.
07:00 – The journey will start over Tekirdağ road. We will stop at a stopover on the road and you can have breakfast (not included). After breakfast, the journey will continue.
11:45 – We will reach the arrive point. We will eat lunch at Çanakkale’s Eceabat district. This, in our Guide Tour, is one of the places where the most important emotional moments experienced, and where the Battles of Gallipoli made in the First World War.
Where will we visit on the Guided Tour?
We will visit places of emotion such as the Anzac Cove, Lone Pine, Australian Memorial, Johnston’s Jolly, the Nek, Chunuk Bair, New Zealand Memorial and Turkish Memorial. After that, we will return to our hotel.

We will stay overnight at the hotel in Eceabat / Çanakkale.

Meal: Breakfast
08:30 – Check out of the hotel.
After leaving the hotel, the journey to the legendary city of Troy will begin.   Our guided tour will take you where the Legendary Trojan Horse is at the place of the legendary story of Trojan Prince, Paris, and Spartan Queen, Helen.
After the Troy Tour, Internal local bus journey to Selcuk / Kusadasi via Izmir will begin where will stay overnight.

Check in the hotel and stay overnight in Kusadasi.

Here, you can visit wherever you want as you wish and explore the city freely. You can make your holiday fun with colorful moments such as joining the boat trips (extra charge), walking on the beach and spending time in the bars amongst the activities you will do.

Meal: Breakfast and Lunch
After breakfast, we check out the hotel to go to the ancient city of Ephesus. Our guided tour will start with a visit to the Temple of Artemis, one of the Seven Wonders of the World. Then we will go to Ephesus which is one of the most magnificent cities of ancient times and the Roman period. Here, you will visit important places such as the Agora, Odeon, Curetes Street, public toilets, Celsus Library, Hadrian Temple, Roman Baths, Grand Theater, and Marble Street.
After lunch, Virgin Mary House, which is said to have passed the last days of the Virgin Mary, will be visited.

We have breakfast and check out the hotel. And the journey will begin towards the famous Pamukkale with its natural beauties.  The Pamukkale Travertine is one of the natural beauties where the water rising from the ground with a temperature of 35 degrees that it creates many small lakes on the mountain and it is a worth seeing place.

You will get a chance to see places such as the ruins of the city of Hierapolis with its basilica, theater, Roman Bath, and Necropolis. Later on, the journey to Antalya will begin by bus. Duration will be around 4 hours. Upon arrival to the bus station in Antalya, met on arrival and transfer to hotel. Check in the hotel.

Just like you are in Kusadasi, you are free to go everywhere in Antalya. You can have fun on the beach if you like or you can also take part in boat tours.
Stay overnight in Antalya.

Day 7 - Perge, Aspendos, and Side Tour & Bus to Cappadocia

After breakfast and leaving the hotel, the journey to Perge, which located 18 km east of Antalya and one of the most important cities of Pamphylia, will begin. At the same time, this city, where the Hittites were settled in 1500 BC, lived here in one of Saint Paul journeys.  Ancient structures such as colonnaded streets, agora, bath, stadium, and theater will impress you. Marble relief workmanship, especially in the theater, will take you back to antiquity.

Aspendos is one of the best-preserved theaters of the day, with a capacity of 15,000 people. The galleries, decorations, and acoustics are the results of an excellent workmanship. Aqueduct close to the theater was the longest water channel of Anatolia. Aspendos, located 45 kilometers east of Antalya, is reached via an old Seljuk bridge. Lunch will be served in a local restaurant.

Side, located 70 kilometers east of Antalya, hosts many historical buildings. The giant theaters, the agora, the magnificent columns of the Apollo Temple are waiting for you. Today, the large Roman bath used as a museum hosts many archaeological artifacts.

The 10-hours internal local bus to Cappadocia journey will begin after the tour ends.

Meal: No Meal
After we arrive in Cappadocia, we will check in at the hotel. It will be good for you to visit Cappadocia freely after a long journey. You can relax in the hotel’s Turkish bath if you want.
And also, you can join an activity with an extra fee. Please, check the extra activities section.
Stay overnight in Cappadocia.

Day 9 - Travel to the North of Cappadocia

On this day, you can join the hot air balloon flight with an extra fee. You can book a balloon ride in the extra activities section.

09:45/10:00 – Our travel team will come to pick you up from your hotels. After meeting with other people in the group, our guided tour is ready to explore the North of Cappadocia. After visiting the Dervent Valley, you will experience an incredible moment with the harmony of the wind formed between the fairy chimneys in Pasabag. Lunch at Avanos where the place of Pottery.

Live moments that will not be forgotten with the works of the Byzantine period exhibited at Goreme Open Air Museum.  We complete the tour with a visit to the Uchisar Rock-Castle, giving you a panoramic view of the valleys of Cappadocia. At the end of the tour, we will come back to the hotel.
Stay overnight in Cappadocia.

Day 10 - Travel to the South of Cappadocia & Fly to Istanbul

On this day, you can join the hot air balloon flight with an extra fee. You can book a balloon ride in the extra activities section.

After you eat and leave the hotel, you will discover the Red Valley where the churches carved into the stone placed. We will hike the Güllüdere valley and visit the village of Çavuşin.  The Old Çavuşin village was abandoned a few decades ago due to landslides. The two most important churches in Cavusin are the Great Basilica dedicated to St.John the Baptist (located on the cliff above the village) and Cavusin Church or the “Great Pigeon House”  in the name of a visit of the famous Cappadocian Emperor Nicephorus Phocas.

After lunch, our address will be the Pigeon Valley. We will visit the Kaymakli Underground City afternoon, where the First Christians lived in fear. The former name is Enegup, which has nearly one hundred tunnels of the underground city, which is one of the most interesting underground settlements in Cappadocia. After leaving, we will visit the castle at Ortahisar.

At the end of the tour, go to Cappadocia airport and fly back to Istanbul.

Arrive at Istanbul.  It is the end of the 10 Days Spirit of Tukey Itinerary.

The price of the tour covers hotel accommodations as mentioned above or similar quality hotels.

Option 1: We can upgrade your hotel accommodation according to your request at an additional cost.

Option 2: If you would like to book your hotel, we can cut mentioned hotel price out. And, we can quote a new tour package price without the hotel.

You can book the tour directly online if the mentioned hotels are suitable for you. If not, please make a request.