[vc_row][vc_column][vc_column_text]Ephesus Ancient City is located in the Selçuk County of İzmir. Ephesus (Ephesus), the first city where was made entirely of marble in the history, is on the UNESCO World Heritage List. History based on 6000 BC, the city was established by warrior women known by the name of Amazon according to legend. It took the name of the city of Apasas in the Kingdom of Arzawa, which means the mother goddess.

The fact that it was a famous port city at the time helped the city to progress rapidly in trade, culture, and art and became one of the wealthiest cities of its time. Everywhere in the city was built spectacular temples, the greatest library of the region and a school of philosophy. Ephesus gradually moved away from the sea by filling the harbors of the alluviums brought by the rivers over time, and gradually began to lose his commercial power. After the major earthquake, Ephesus left behind the magnificent days.[/vc_column_text][/vc_column][/vc_row][vc_row][vc_column][vc_raw_html]JTNDZGl2JTIwY2xhc3MlM0QlMjJhbGVydCUyMGFsZXJ0LWluZm8lMjIlM0UlMEElM0NzcGFuJTIwY2xhc3MlM0QlMjJsZWFkJTIyJTNFQ2hlY2slMjB0aGUlMjBiZXN0JTIwRXBoZXN1cyUyMHRvdXJzJTNDJTJGc3BhbiUzRSUwQSUzQ3VsJTNFJTBBJTNDbGklM0UlM0NhJTIwaHJlZiUzRCUyMmh0dHBzJTNBJTJGJTJGdG91cnNjZS5jb20lMkZ0b3VyJTJGZXBoZXN1cy1kYXktdG91ci1mcm9tLWlzdGFuYnVsJTJGJTIyJTNFRXBoZXN1cyUyMERheSUyMFRvdXIlMjBmcm9tJTIwSXN0YW5idWwlM0MlMkZhJTNFJTNDJTJGbGklM0UlMEElM0NsaSUzRSUzQ2ElMjBocmVmJTNEJTIyaHR0cHMlM0ElMkYlMkZ0b3Vyc2NlLmNvbSUyRnRvdXIlMkZjYXBwYWRvY2lhLWVwaGVzdXMtdG91ci0zLWRheXMlMkYlMjIlM0VDYXBwYWRvY2lhJTIwJTI2JTIwRXBoZXN1cyUyMFRvdXIlMjAzLURheXMlM0MlMkZhJTNFJTNDJTJGbGklM0UlMEElM0NsaSUzRSUzQ2ElMjBocmVmJTNEJTIyaHR0cHMlM0ElMkYlMkZ0b3Vyc2NlLmNvbSUyRnRvdXIlMkZlcGhlc3VzLXBhbXVra2FsZS10b3VyLWZyb20taXptaXIlMkYlMjIlM0VFcGhlc3VzJTIwYW5kJTIwUGFtdWtrYWxlJTIwVG91ciUyMEZyb20lMjBJem1pciUzQyUyRmElM0UlM0MlMkZsaSUzRSUwQSUzQ2xpJTNFJTNDYSUyMGhyZWYlM0QlMjJodHRwcyUzQSUyRiUyRnRvdXJzY2UuY29tJTJGdG91ciUyRmVwaGVzdXMtc2lyaW5jZS12aWxsYWdlLXRvdXIlMkYlMjIlM0VFcGhlc3VzJTIwYW5kJTIwU2lyaW5jZSUyMFZpbGxhZ2UlMjBUb3VyJTNDJTJGYSUzRSUzQyUyRmxpJTNFJTBBJTNDJTJGdWwlM0UlM0MlMkZkaXYlM0U=[/vc_raw_html][/vc_column][/vc_row][vc_row][vc_column][vc_column_text]

Parts of the Ephesus Ancient City

In that period, city council meetings, theaters, and competitions were held in places called Odeon.  Odeon in Ephesus is a theater-shaped area in which 1400 people capacity. It seems that the stage was designed as the closed area because there were no gutters to drain the rainwater. Today, however, it is host to classical music concerts and jazz festivals. You must have the precedence listening to a concert in the wonderful atmosphere of this authentic architect. You feel the curative effect and integrative effect of the music in the same order as the ancient civilizations of the ancient city. 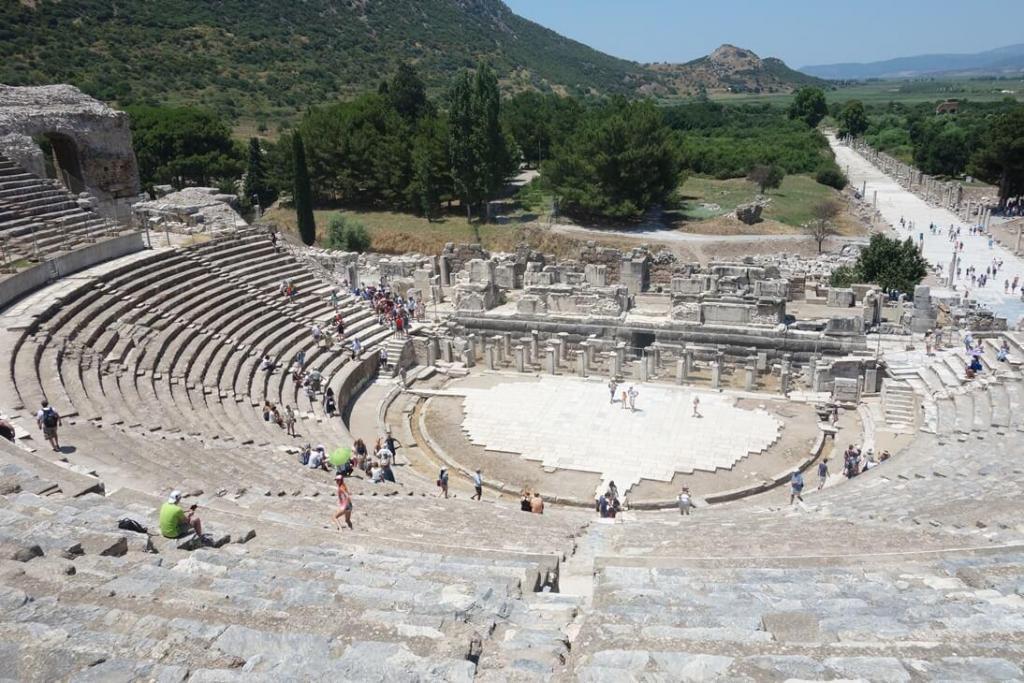 The town hall (prytaneion) is a place where diplomatic relations about the city administration is conducted and its halls are equipped with gods and emperor sculptures. Artemis sculptures of the most valuable works of the Ephesus Museum were found in these excavations. There was a fire in the altar of Goddess Hestia, near the building, considered as shrined. So this fire represented the city’s independence and immortality, it was burned without blowing out. It is very enjoyable to imagine Ephesus, which shines beneath the flames through the sky and the sunlight. 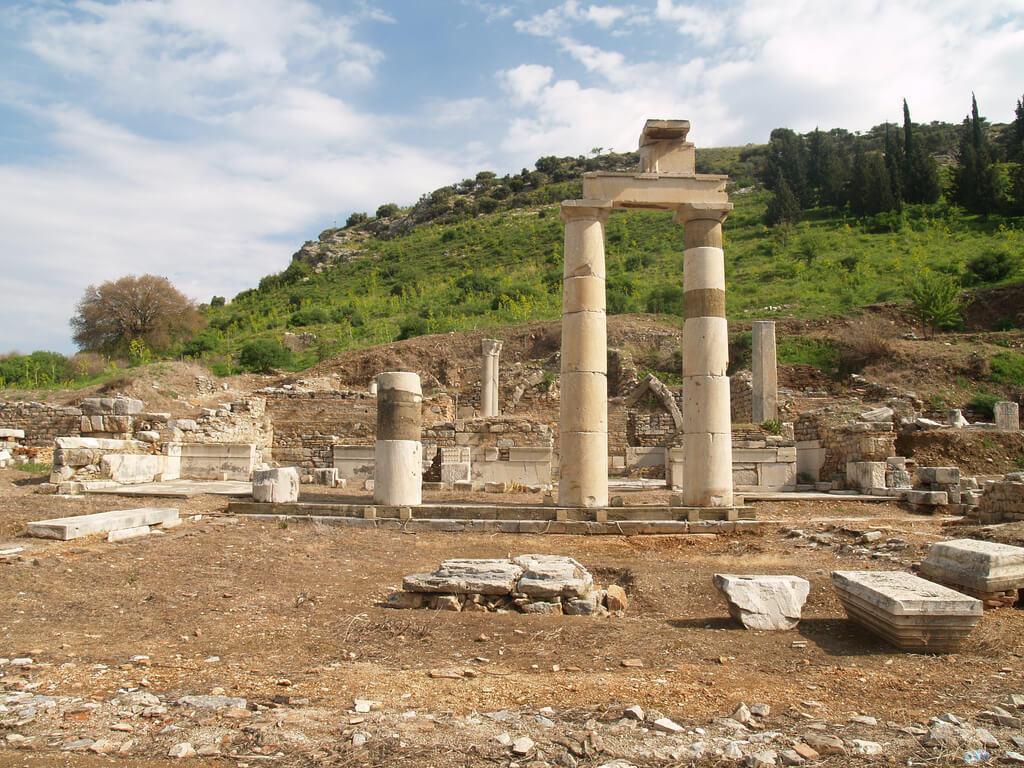 The Temple of Domitian

The Domitian Temple is on the way from Odeon to the gateway to Curetes Street. The Ephesians built this temple to show their gratitude to the facilities provided by Emperor Domitian. Domitian is the first emperor to be built for his name in the Ephesus. But the cult statue of the temple was destroyed by the acceptance of Christianity, and there is not a part that remains today except head and arms. The pieces of the sculptures are exhibited in İzmir Archeology Museum and the entrance altar of the temple is exhibited in Efes Museum. 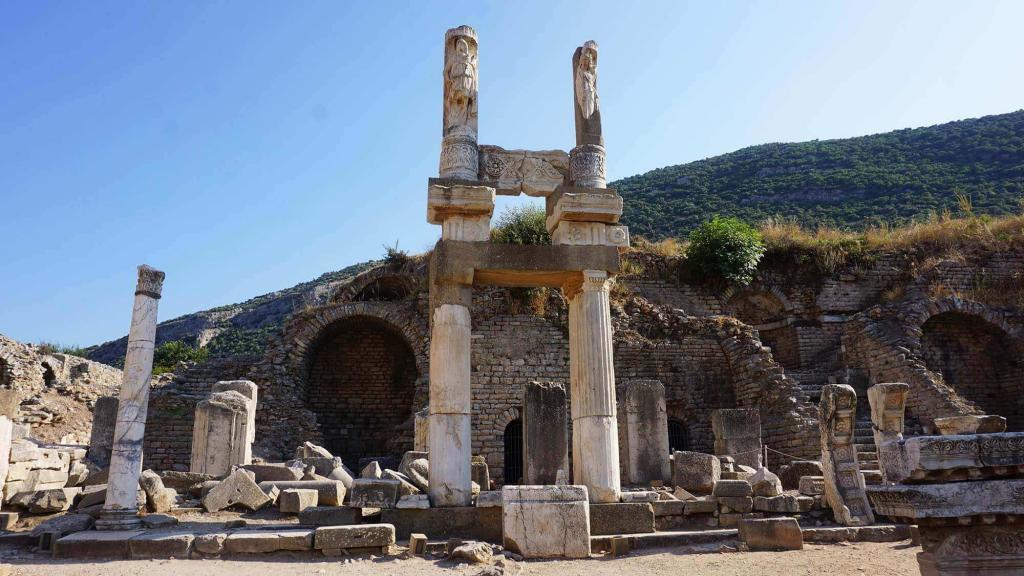 Curetes Street is the most functional street of the city, extends from the Heracles Gate to the Celsus Library. The large sewerage system underneath the floor covered with marble plaques proves the skill level of civilization at that time.

Rumour has it that a group of priests in Ephesus is called the Curets, known as mythologically semi-gods. In the columns placed at the beginning of Street, the names of these priests are also known as ‘Curetes Street’. Monumental buildings such as the Traianus Fountain, Hadrianus Bath, and Skolastica Baths are located on this street. Every step all in this way, every work that you skim through make you a journey on time. Even the book is written on behalf of the city’s new habitants are the cute cats, they go out to face from somewhere and bring joy to the travel. 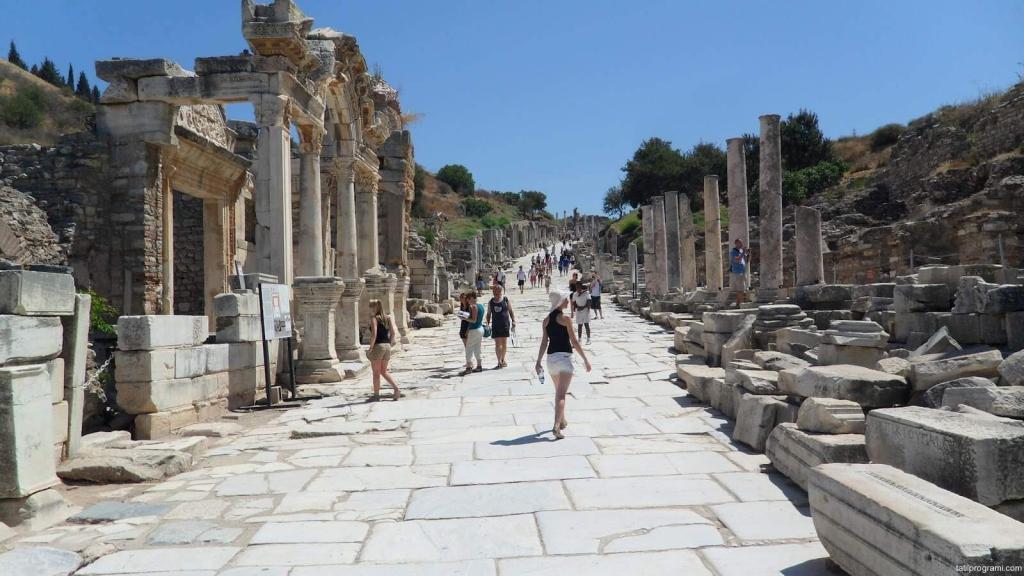 The Skolastica Bath is a 3-storey building and its the entrance is on Curetes Street. There are two features that make the bath important. One of them is the fact that poor people had not to charge for entrance. Perhaps they wanted to provide for all people the most important element of civilization is that they are struggling with class distinction and that they are able to reach the most basic needs such as cleanliness. The other is the use of advanced technology compared to the period. The bath has a central heating system. Hot vapor is circulating through all the rooms through the canals they built into the walls. It is a very important structure in terms of understanding the progress of Ephesus among civilized societies. The Bath was not only used for cleaning but also for socializing and having fun. As I walk through the ruins, I feel like hearing the laughing conversations involved the harp melodies. 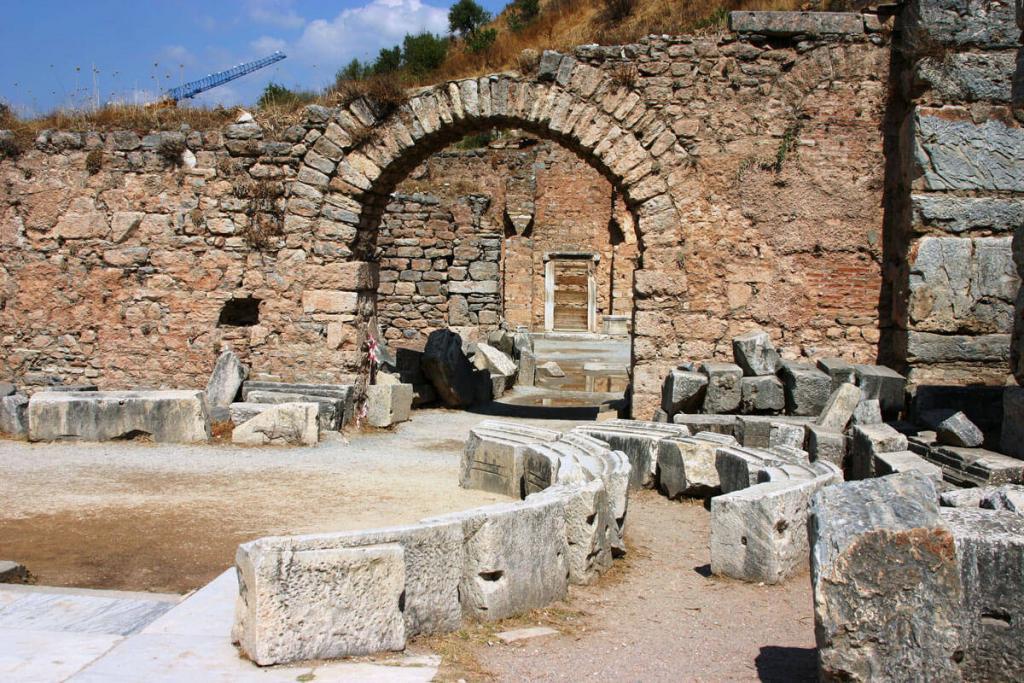 The temple was built to honor the Roman Emperor Hadrian. This temple which reached today from ancient times is a rare structure of the city. There are interesting reliefs on the gateway which depict the legend of Ephesus’ building. Despite a long time, the reliefs on it are still amazing. The inscription pedestals in front of the temple still remain with the strength of being able to carry the sculptures of the Roman emperors at that time. 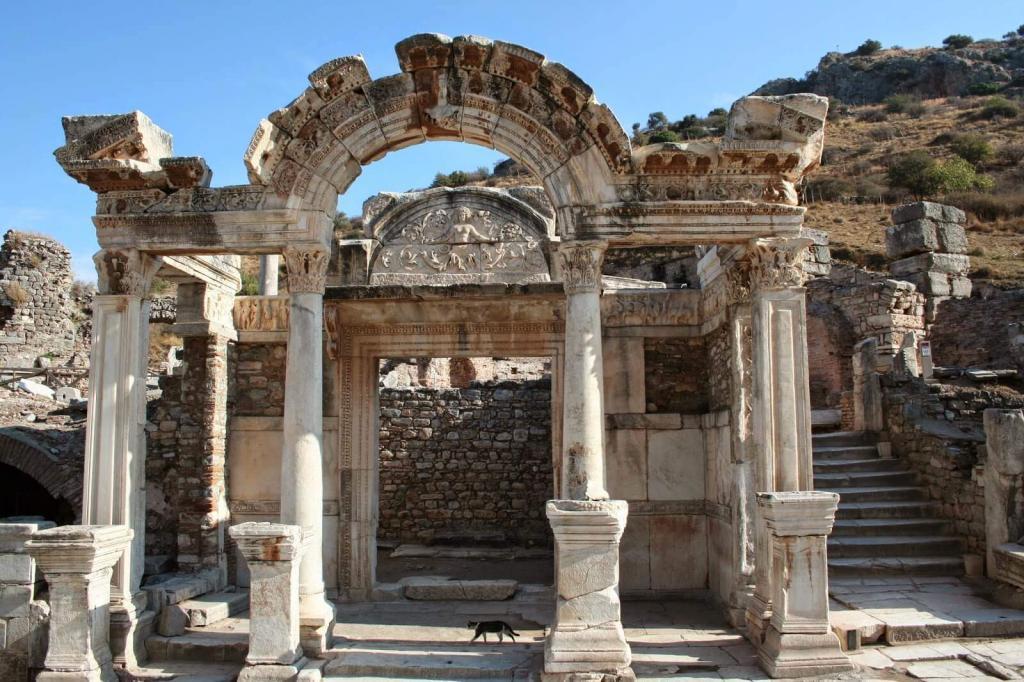 Celsus Library is the most eye-catching building that is extant in the Ephesus ruins. There are four female sculptures on the exterior wall which have splendid views. These sculptures symbolize the aphorism (Sophia), knowledge (episteme), wisdom (Ennoia) and virtue (arete). The library, which was built for the memoir of Roman after the death of the Roman senator Celsus, is also a mausoleum. Celsus’s sarcophagus is beneath the western wall of the structure. The library, which had 14,000 books at the time, was one of the libraries with the richest content of ancient period. So much so that the library has an important role in the development of famous people such as wise Heraclitus, dream interpreter Artemidoros, poet Callinos, physician Soranos. After the afternoon, the sun shines softly behind your library, making a visual feast to take creative photographs. 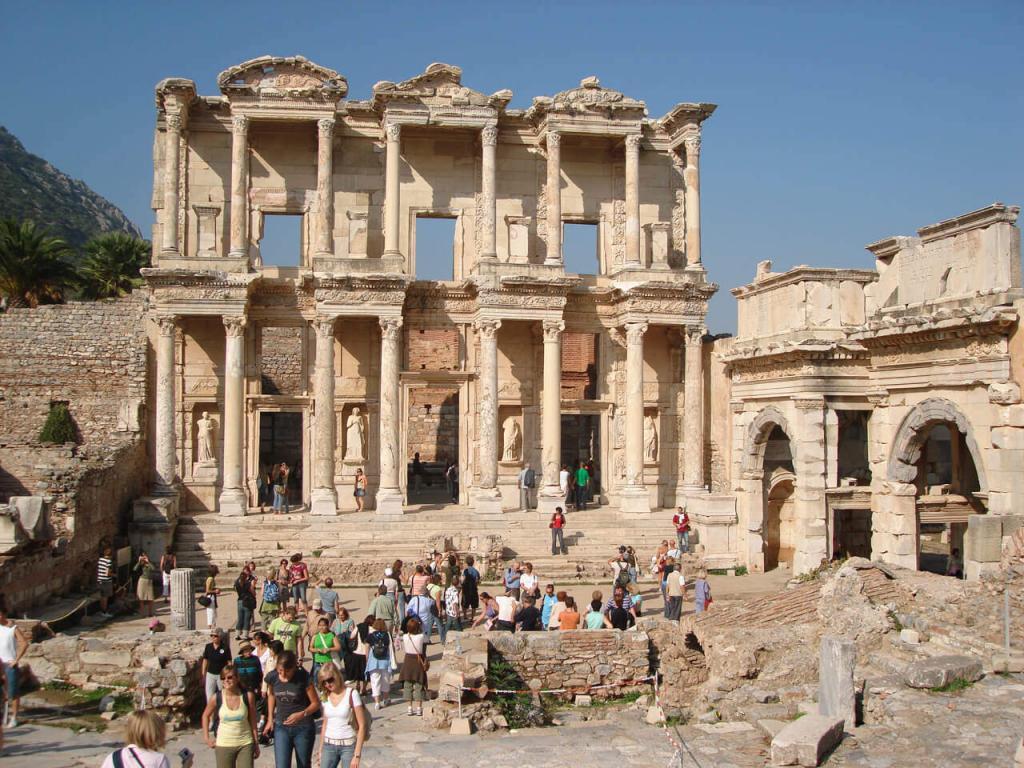 Marble Street provides transportation between Celsus Library and Odeon. In the street where the cars are used, the pedestrians are not forgotten either. The high platform on the side of the road serves the same purpose as today’s pavements. It is admirable that they have a human-focused understanding of urbanism centuries ago.

There is a marble on the street with a female foot and a head sculpted on it. This marble, which is believed to be the world’s first advertising signboard, depicts the House of Love, which is found in the next. 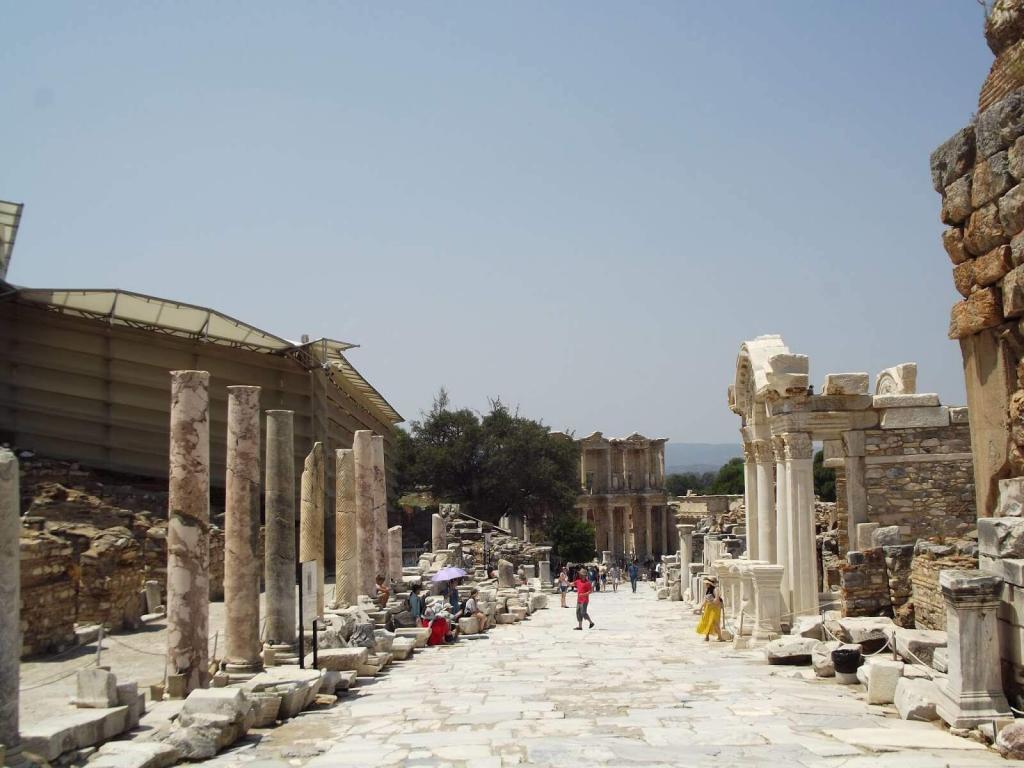 House of Love is located at the intersection of Curetes Street and Marble Street. It is a favorite place for marines sailing to Ephesus. The house has a secret passage to both the Celsus Library and the Skolastika Bath. These passages were made for the Ephesians male who wanted to dodge without getting caught to reach the house. The building consists of the main corridor and the rooms that connect of this corridor. It is known that men entered after a short ritual in front of the Aphrodite sculpture at the entrance. Who knows how many secret lovers witnessed to this house decorated with mosaics depicting the four seasons on their walls. 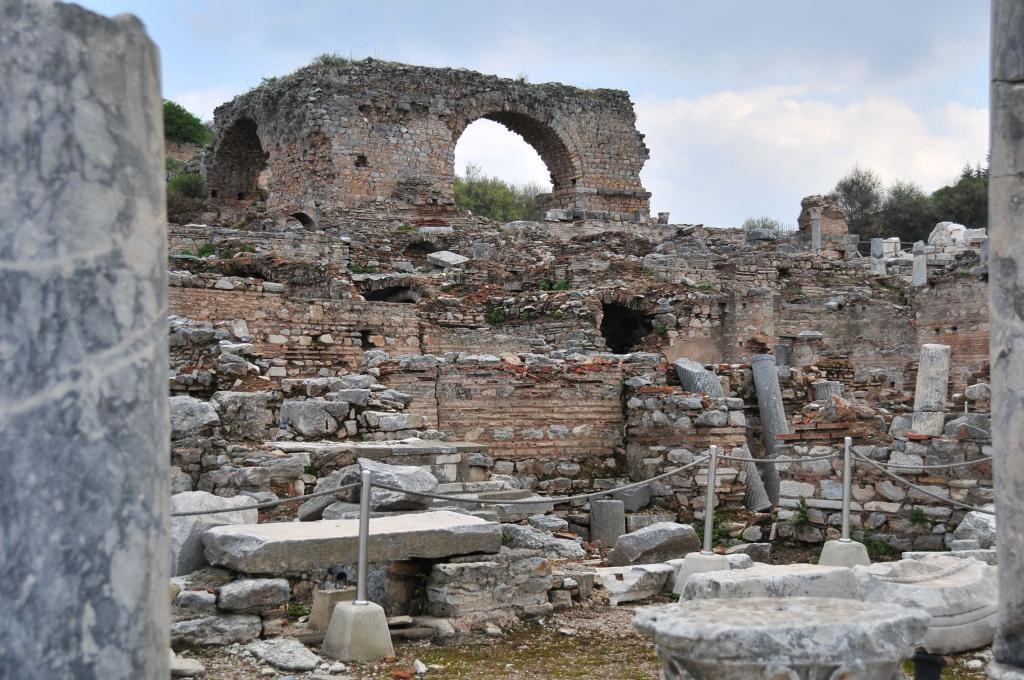 The Grand Theater is the largest open-air theatre in the ancient world with a capacity of 24,000 people. It has a triple-storey facade. In addition to the theater used for shows, they were also used as gladiators arena. Various exhibitions began to be held to honor Dionysus, the god of wine in vine-harvest feast. At the main point of these games was Dionysus’ philosophy of life that was intermittent between the pleasure and the suffering. Endless struggles between people and the gods have been described. The rolls were made by wearing masks carrying different expressions instead of facial expressions. Over time, these performances shaped the modern contemporary theater. This is where the icon of the theater is laughing and the crying masks. 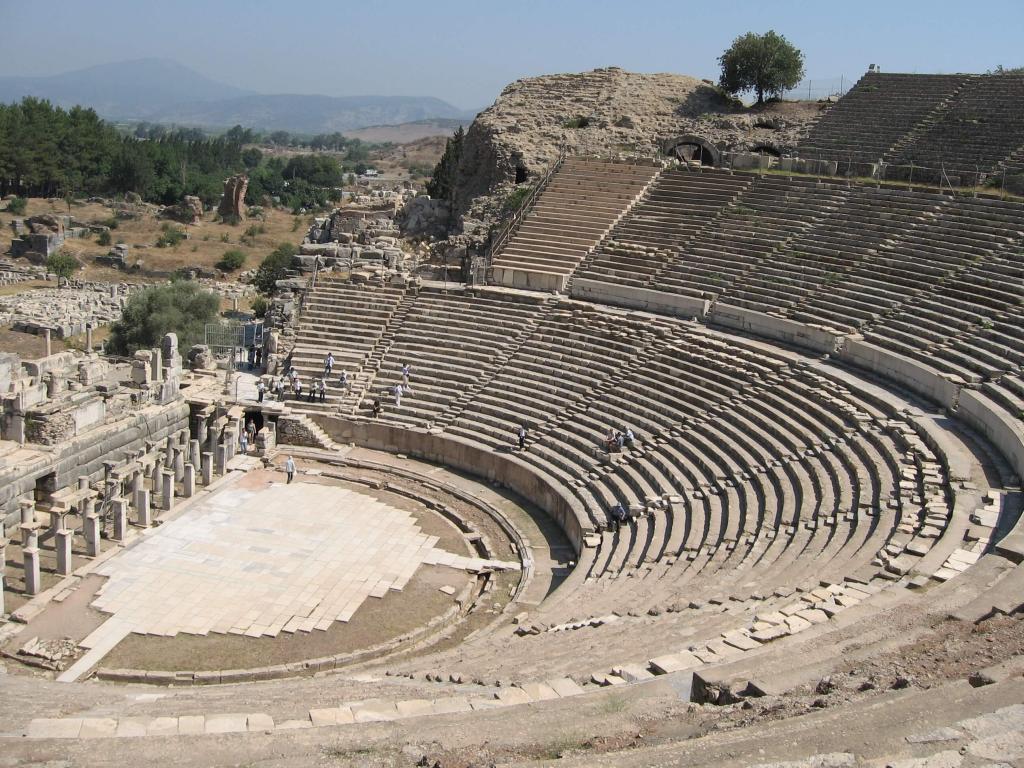 Harbour Street (Arkadiane) is the longest street in Ephesus connecting Odeon and ancient port. The two sides of the street adorned with magnificent columns that you will feel like walking in a historic parade. This path, which the kings meet and the religious ceremonies are organized, reveals the magnificent experience of the period. 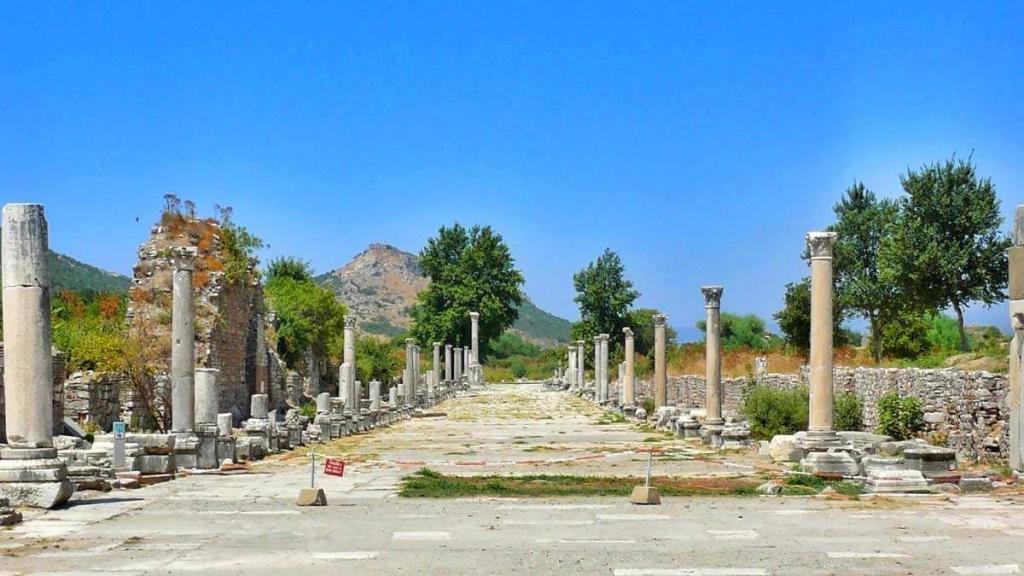 Virgin Mary Church is located to the North Harbour Street. It is one of the first seven churches of Christianity in the world. It is also where the Catholic sect is spread. Mary has a very special meaning for Christians, since she was accepted as “God Mother” in this church. I can feel that holy air in every corner that I step on in the light of this information. This is the place where the thyme smells with its presence. 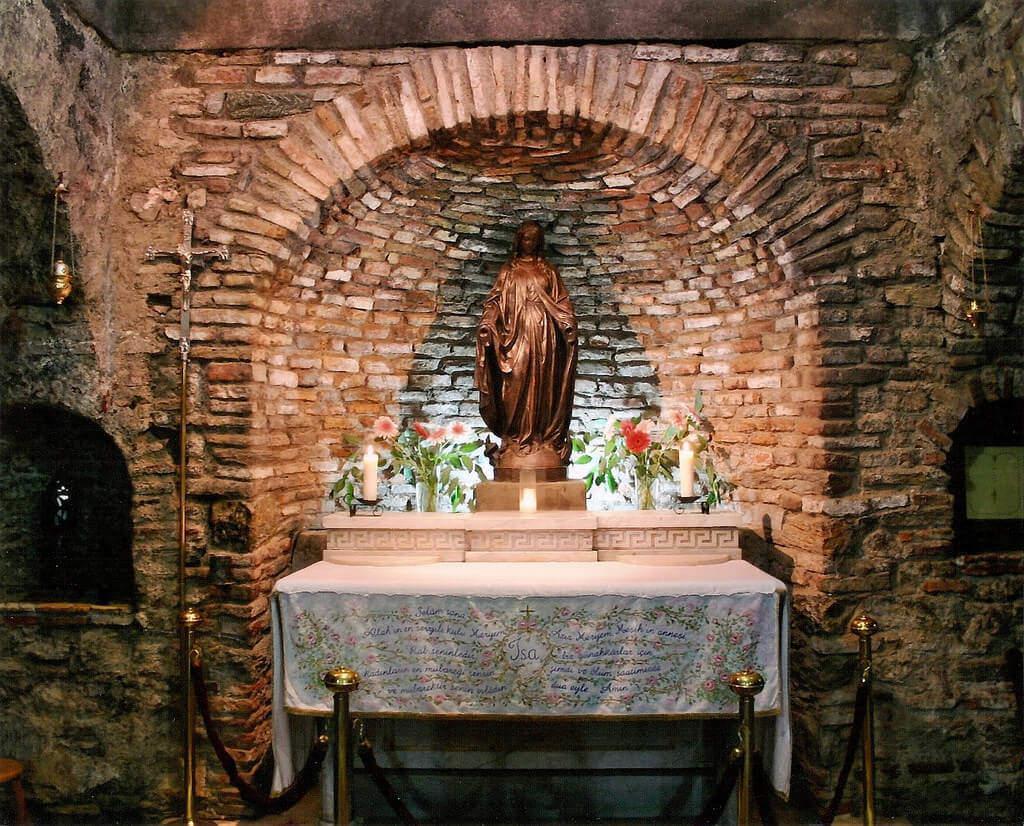 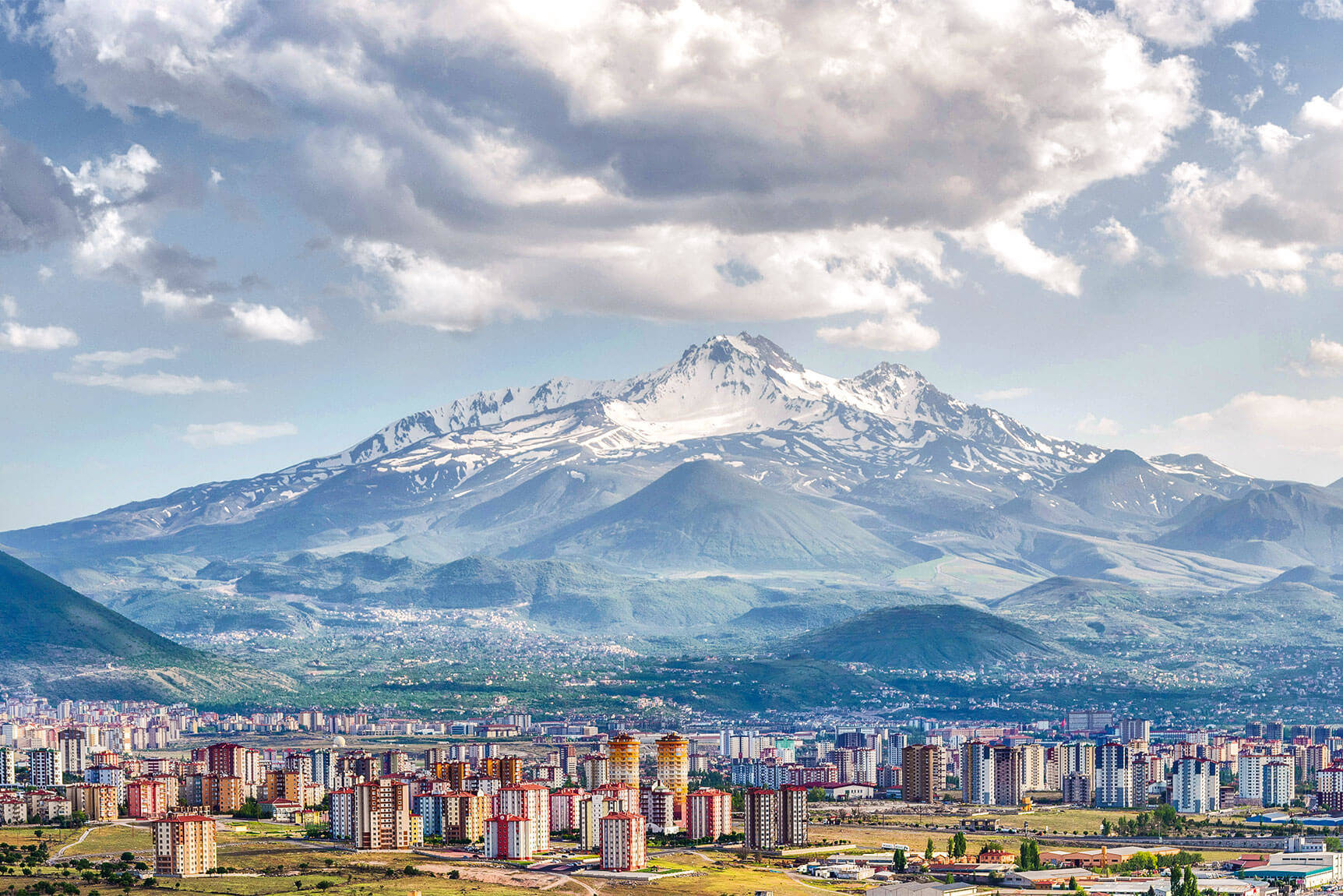 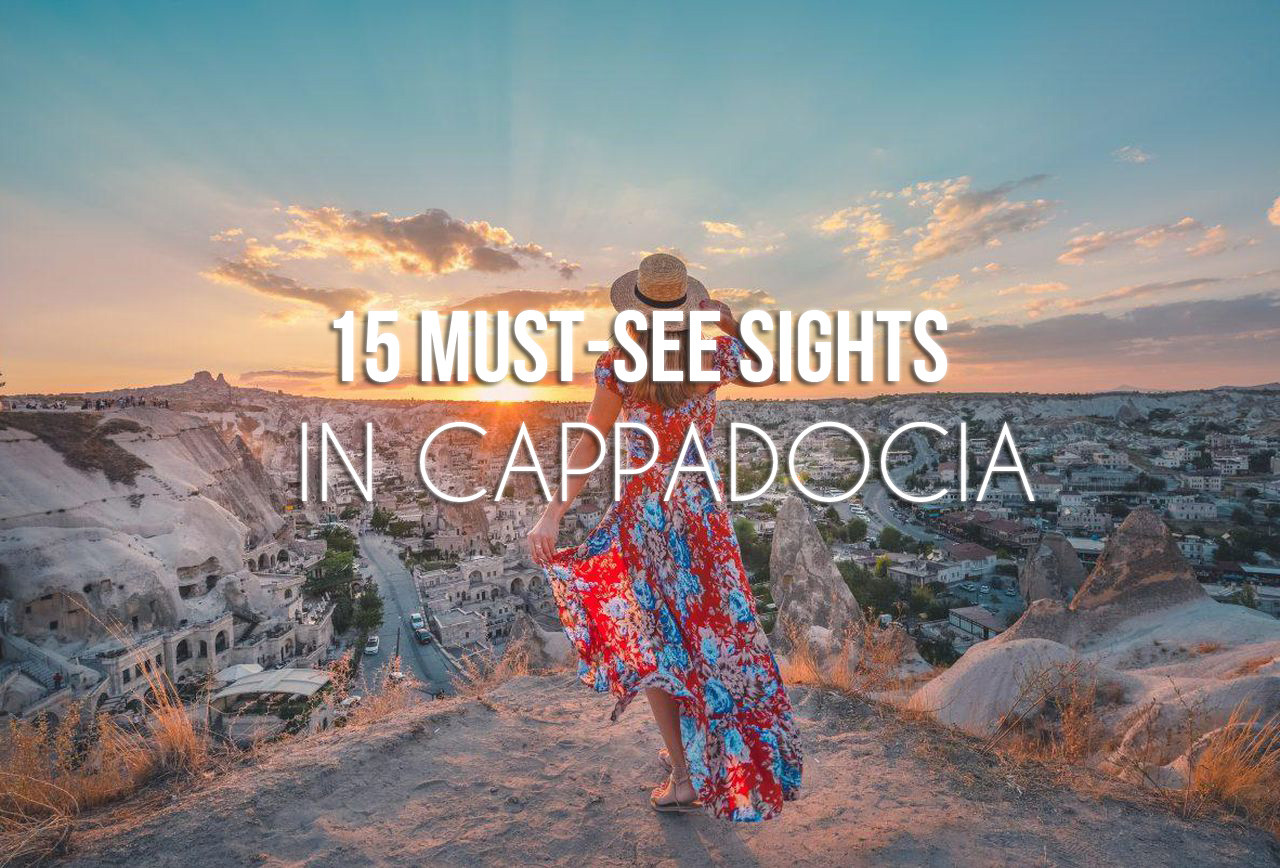 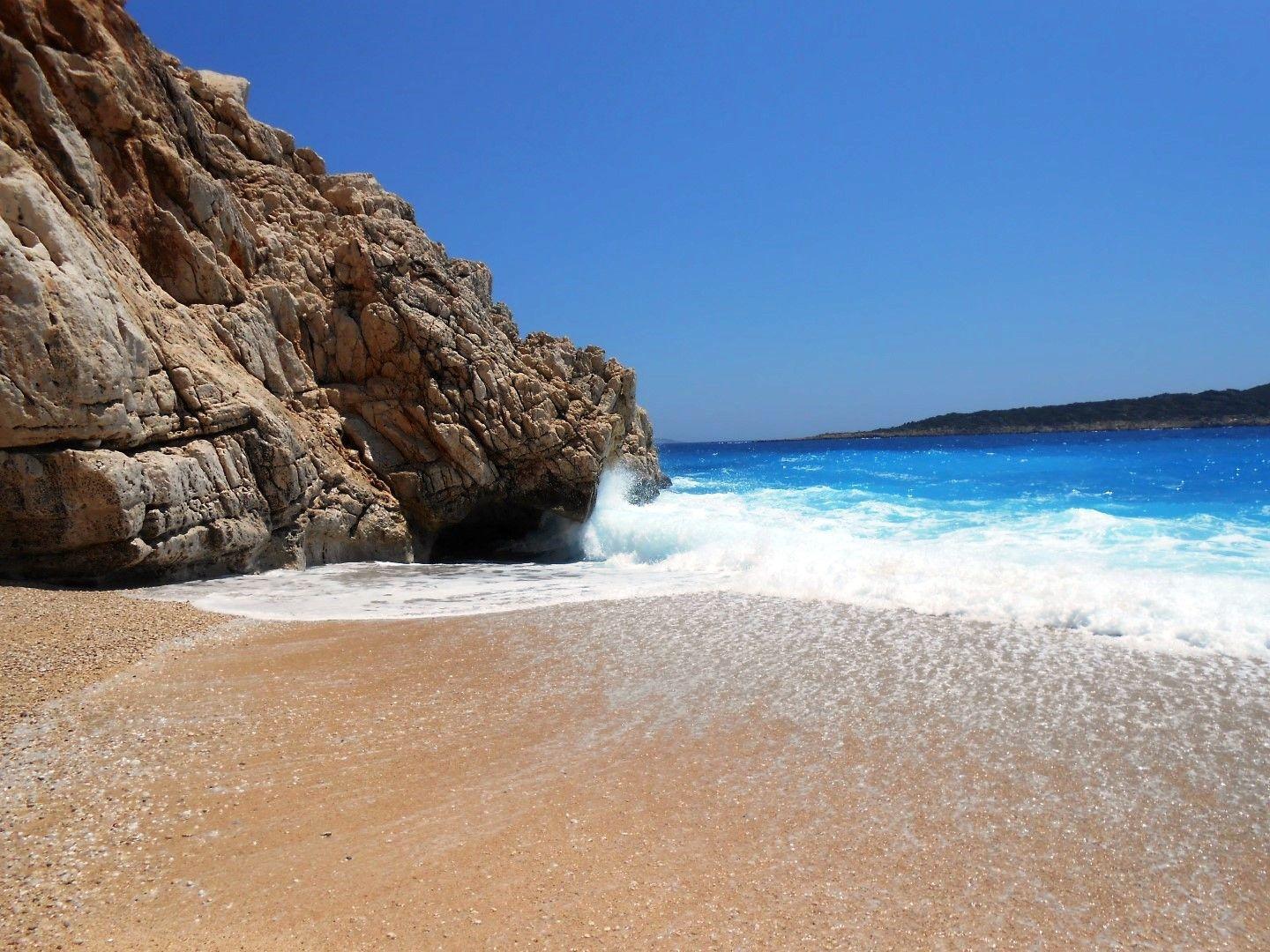 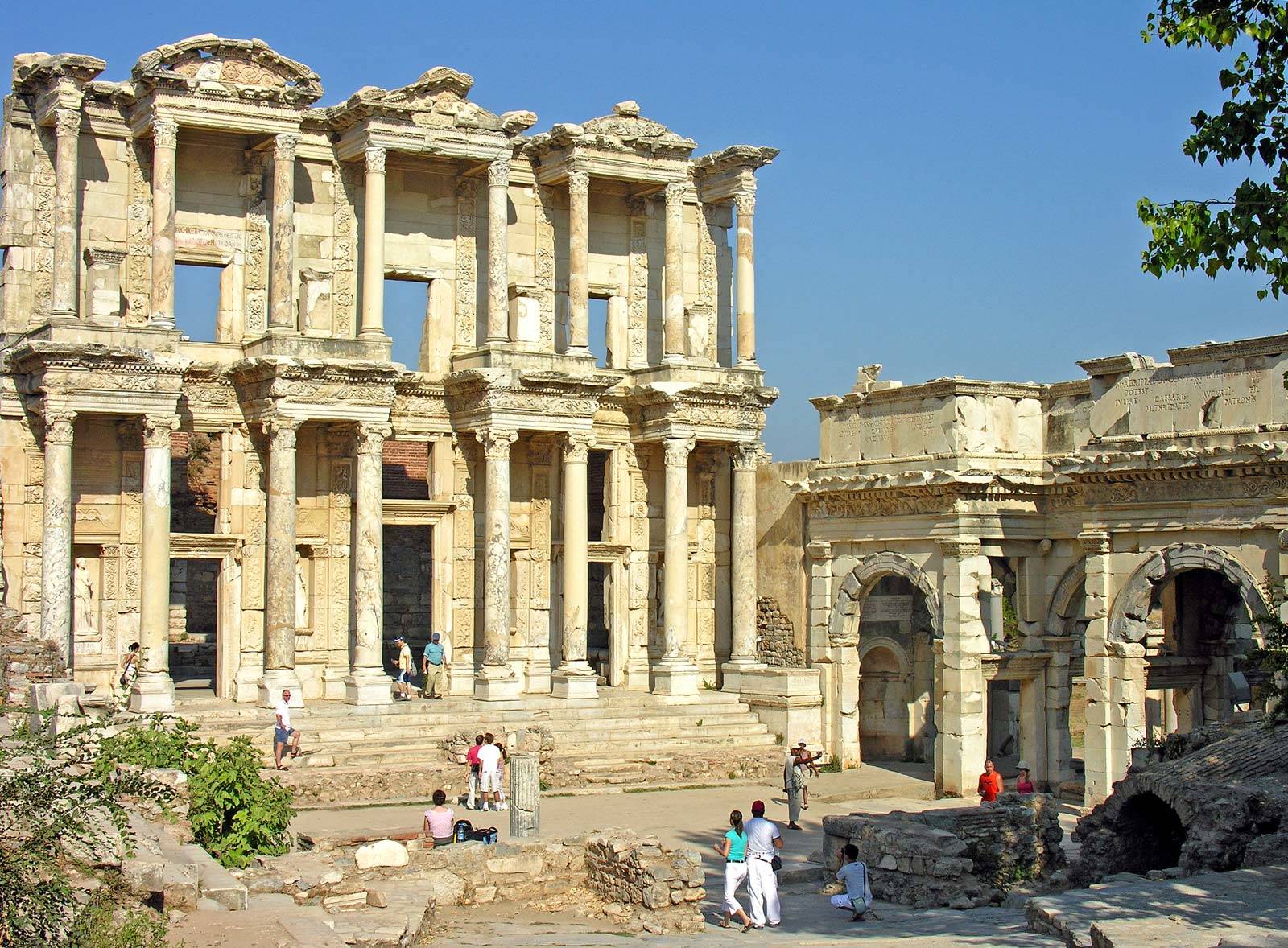